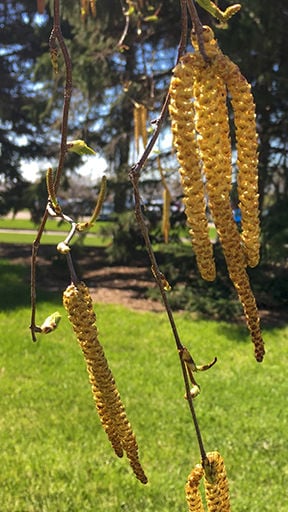 Some tree species break bud before others, consistently from one year to the next.

What’s the first tree to break bud in the spring?

I used to think that it was American elm, with its small flowers, barely tinged with a hint of red. This year, though, I observed more locations and new tree species.

Red elderberry and the gooseberries had leaves growing before other species. A few days later and the flowers began showing up. Willows and quaking aspens were first, a few days before American elm.

The technical term for timing in nature is “phenology.” Two things stand out about phenology. First, it’s relative. Some species break bud before others, consistently from one year to the next.

Second, variability still occurs each year: When exactly will the cherry blossoms bloom? When should sugar maple trees be tapped to collect the sap to make maple syrup? In some years, we have an early spring, while in other years, it’s delayed.

O.A. Stevens of the North Dakota Agricultural College did some amazing work with phenological observations. From 1910 through 1961, he recorded the date that he saw the first flower or first leaves on hundreds of plant species. Steve Travers in NDSU’s Biological Sciences Department has continued Stevens’ work with some great research of his own.

What do you observe every year? My late mother-in-law used to track the date that the ice was completely off the lake. She also recorded the date of the first hummingbird visit to her feeder.

Other people record when the tulips emerge in the spring. You can add your own observations through a great citizen-science program called the National Phenology Network (https://www.usanpn.org/usa-national-phenology-network).

An understanding of phenology also can be useful for determining when to treat early season pests. The science is highly developed for many agricultural pests, but information on many tree pests is lacking.

Cankerworm populations, for example, are predicted to be high through much of North Dakota this year. But when should we look for them, and when should trees be treated? In a “normal” year, I would have guessed that treatments would have been applied a few weeks ago.

However, we’re behind schedule this year. Or maybe I should study the cankerworms’ schedule a bit more; they’re probably right on time.

For more information, contact your local NDSU Extension agent. Find the Extension office for your county at https://www.ag.ndsu.edu/extension/directory/counties.