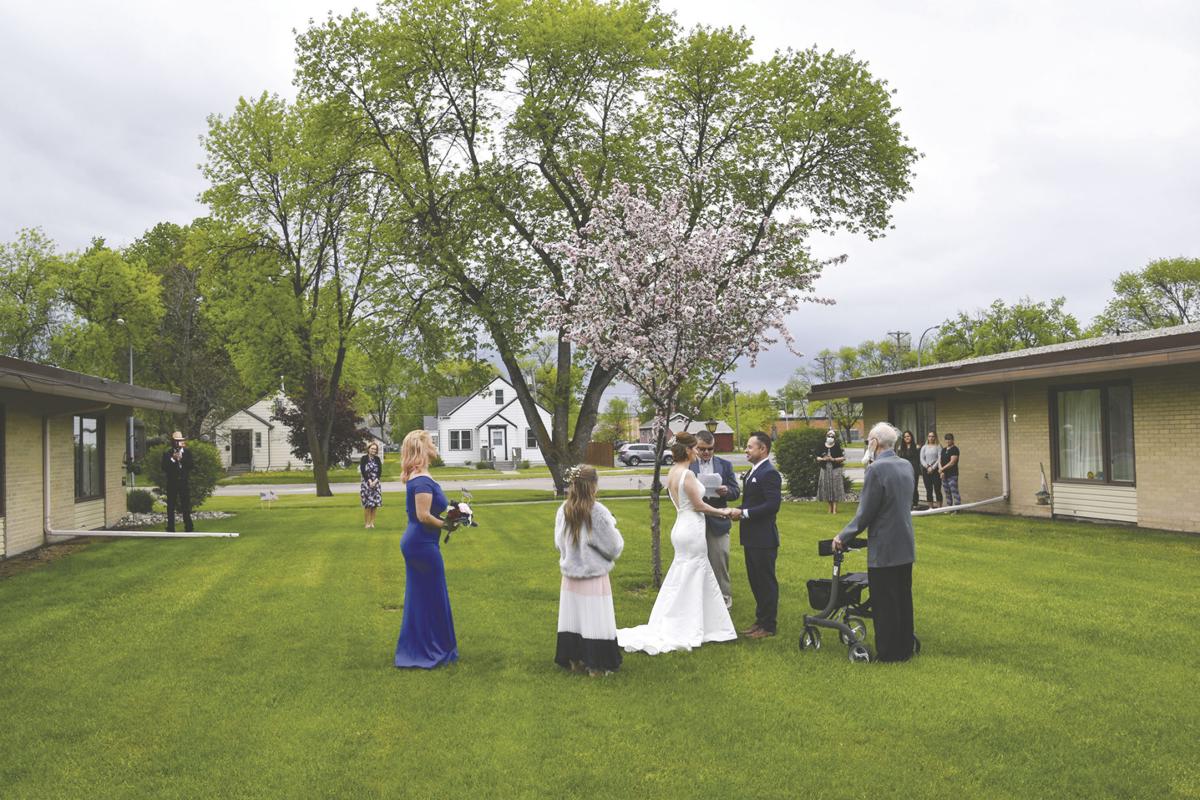 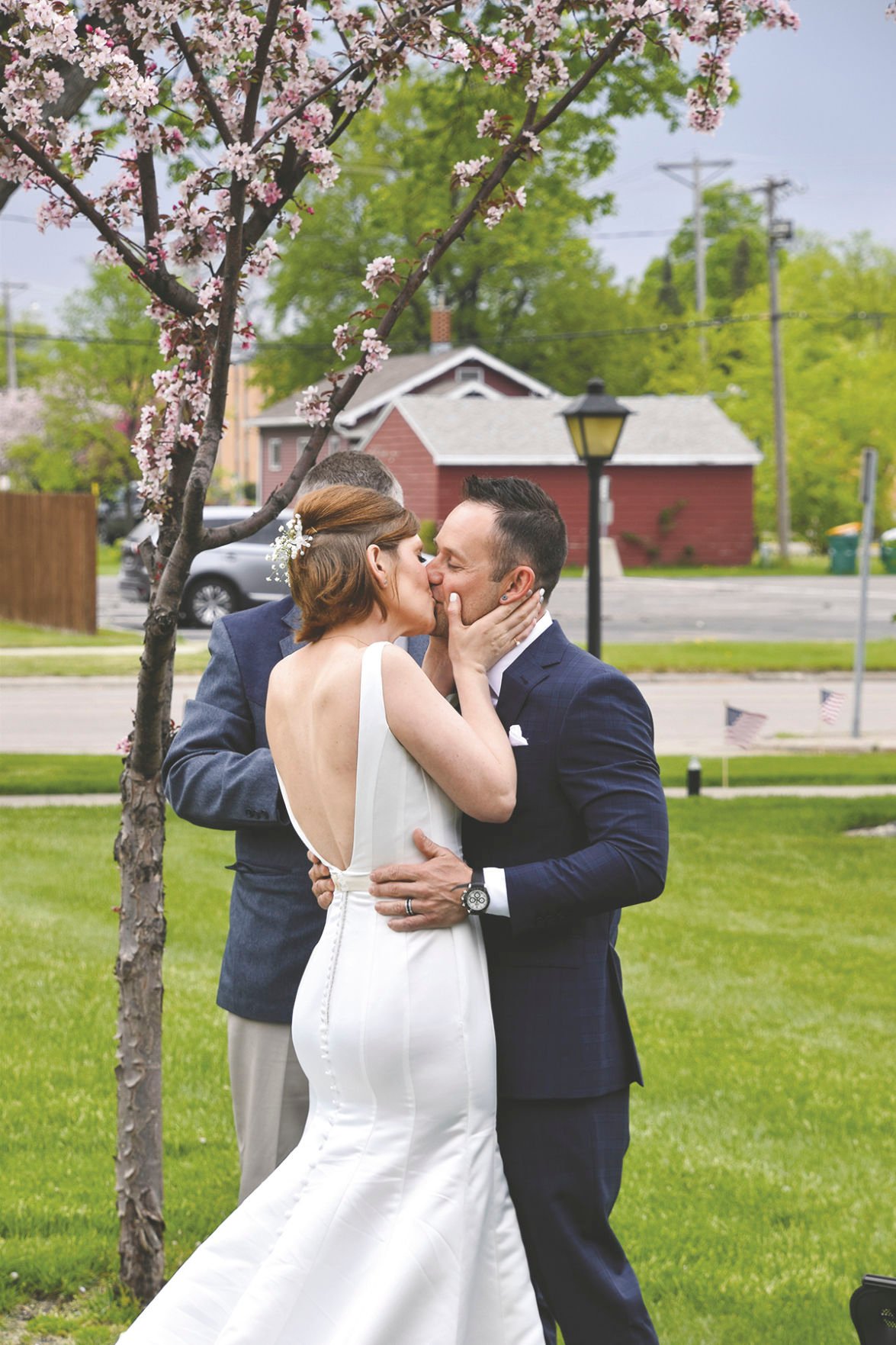 Susan and Kurt Hansey share their first kiss as a married couple. The two make their home in south Fargo. 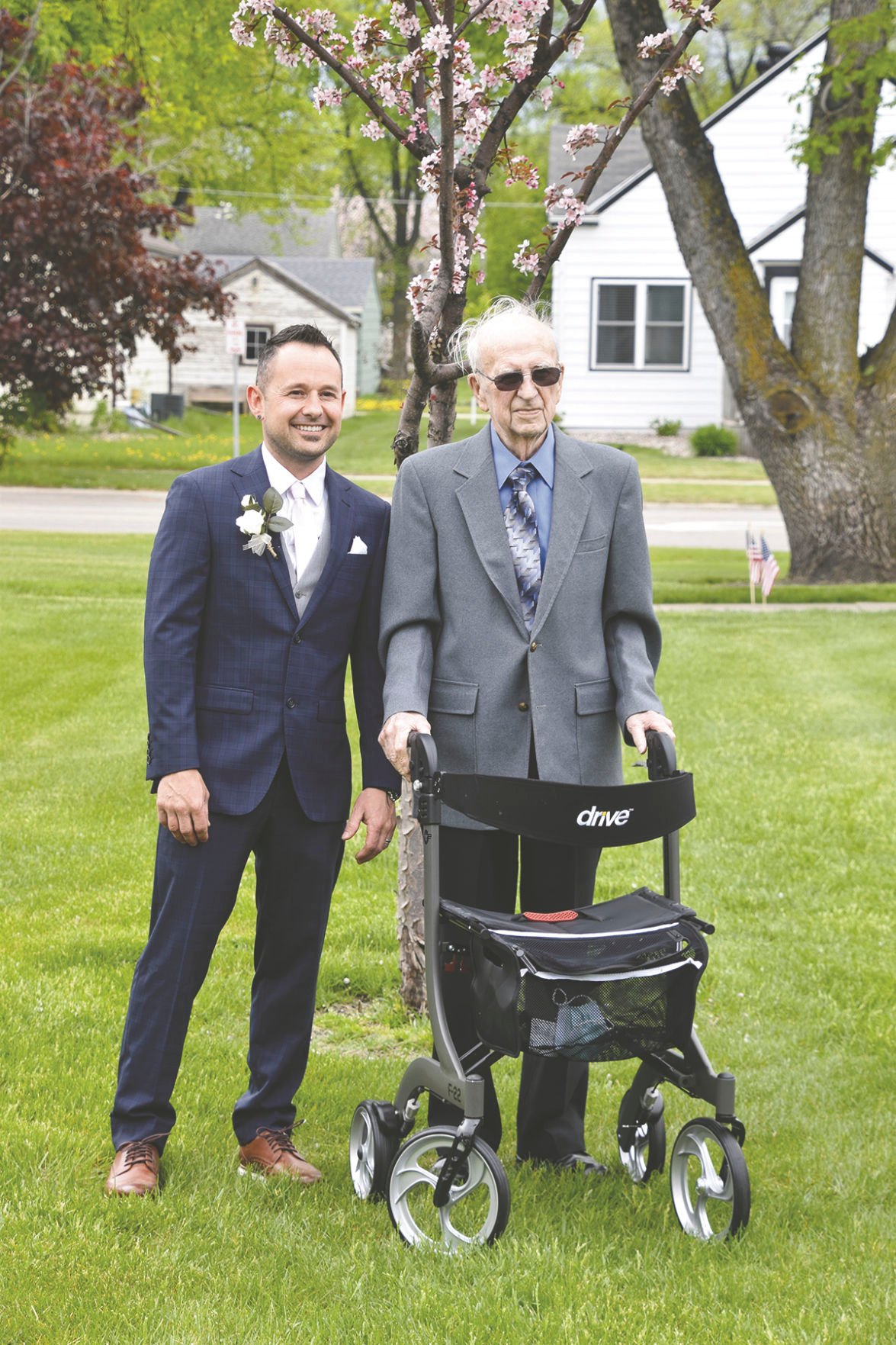 Kurt Hansey asked his grandfather, Meryl Hansey, to serve as best man at his wedding in Wahpeton. Meryl is a resident of The Leach Home, where the ceremony was held, and has been a strong influence in Kurt's life, he said. 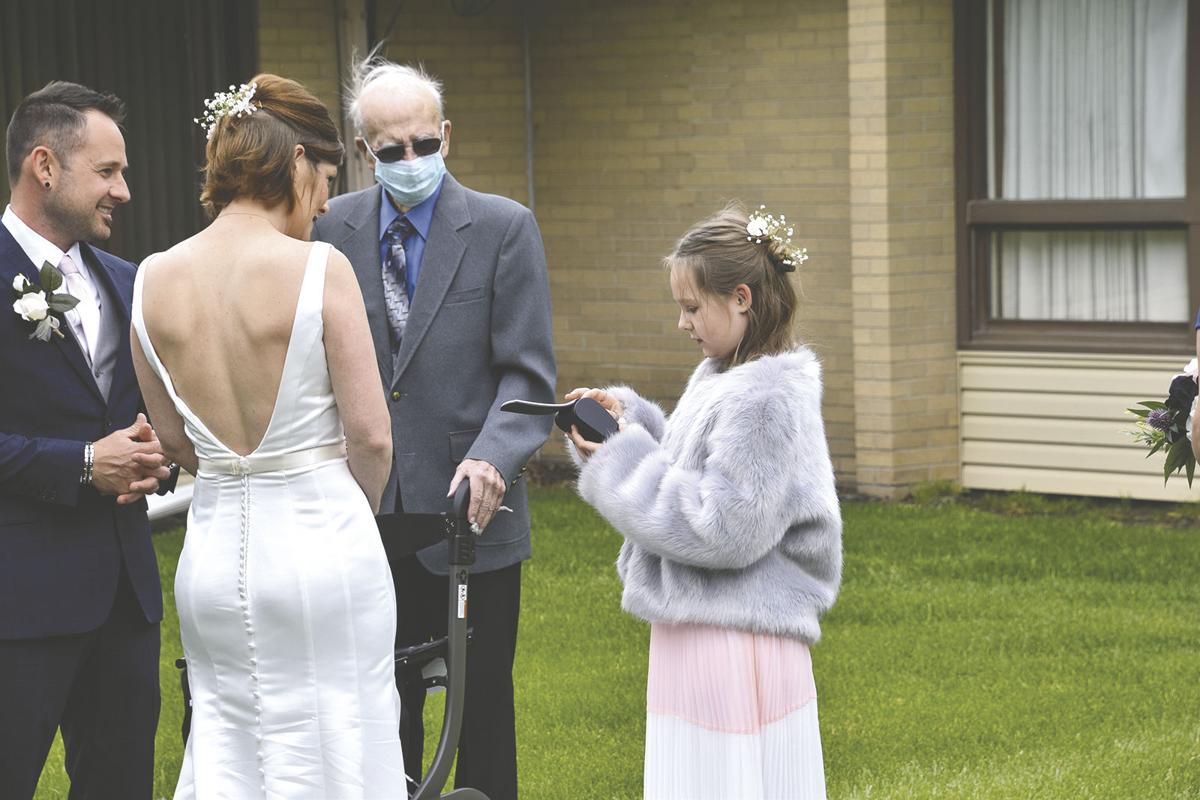 Addison Hansey, 9, was part of Kurt and Susan's wedding ceremony. Here, she opens a necklace from the newlyweds. 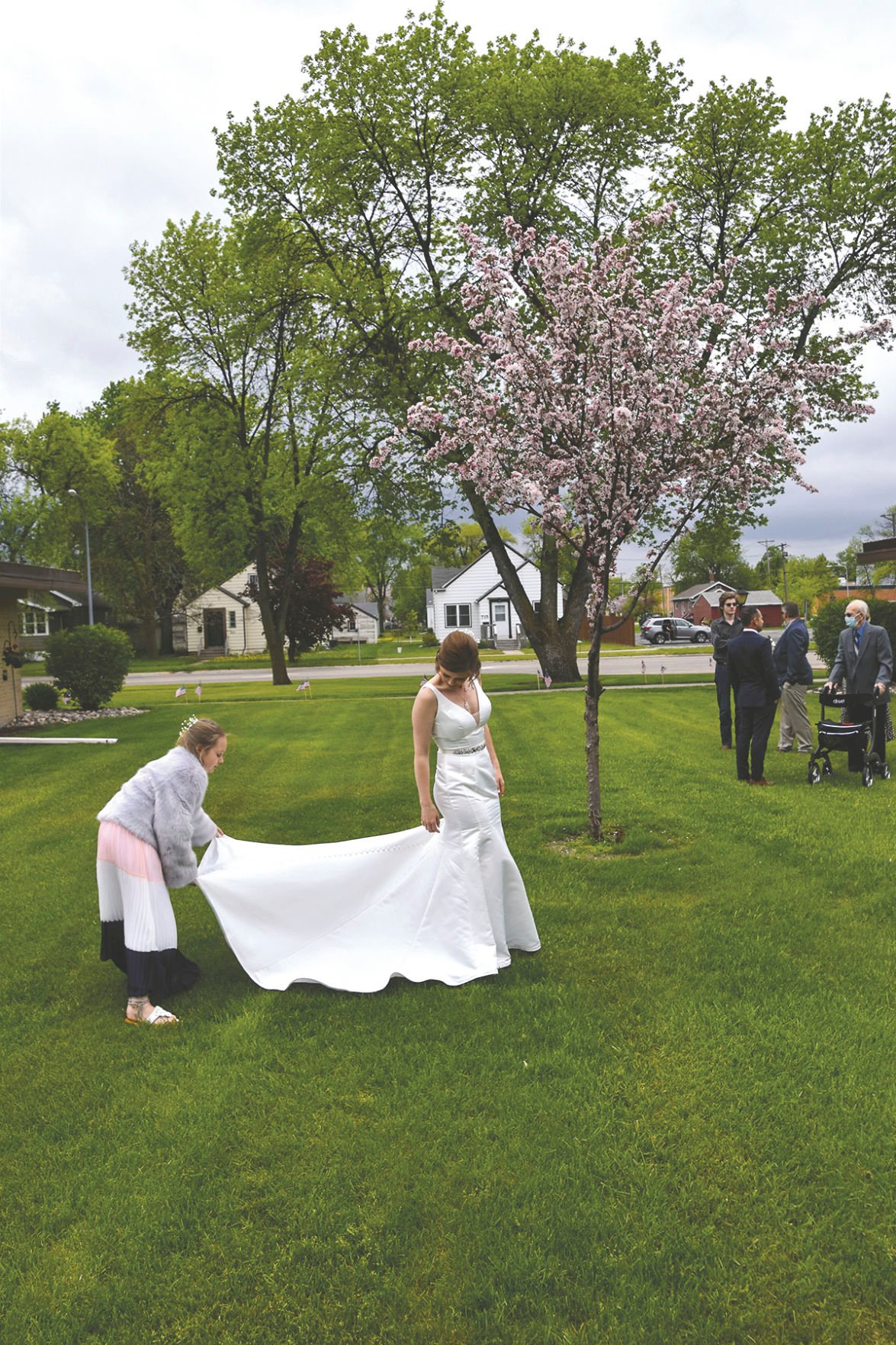 Addison Hansey lays out the train on Susan's gown before the ceremony. 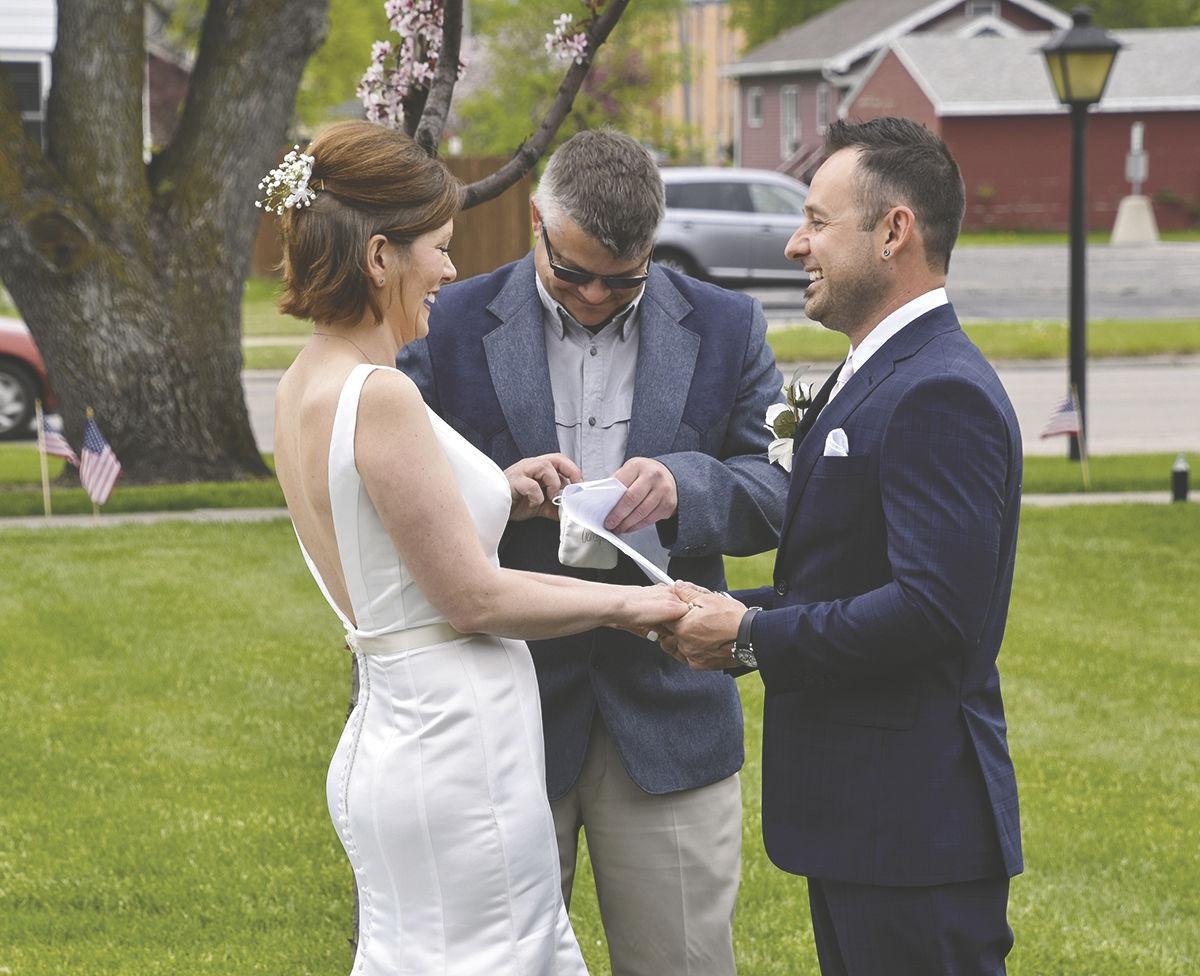 Susan and Kurt Hansey share a laugh with Officiant Jesse Novotny, a friend of Kurt's.

Susan and Kurt Hansey share their first kiss as a married couple. The two make their home in south Fargo.

Kurt Hansey asked his grandfather, Meryl Hansey, to serve as best man at his wedding in Wahpeton. Meryl is a resident of The Leach Home, where the ceremony was held, and has been a strong influence in Kurt's life, he said.

Addison Hansey, 9, was part of Kurt and Susan's wedding ceremony. Here, she opens a necklace from the newlyweds.

Addison Hansey lays out the train on Susan's gown before the ceremony.

Susan and Kurt Hansey share a laugh with Officiant Jesse Novotny, a friend of Kurt's.

When Susan Hunley and Kurt Hansey met in a bar last year, they had no idea they’d fall in love and get married during a worldwide pandemic.

He is a master plumber and she is a property owner of several Airbnb rental properties in Denver and Fargo. She thought she might have work for him on a new triplex project she was planning, so they exchanged numbers during their initial conversation that night.

“I thought he was cute, but got his number when I learned he was a plumber,” she said. “I looked him up on Facebook. I just wasn’t ready to pull the trigger on the triplex project and kept thinking about him.”

By August, the two were regularly chatting on Facebook and having long phone conversations.

“I finally broke down and let him take me on a date,” she said.

In January, she moved to North Dakota from Colorado.

The whirlwind romance led to a proposal and the couple set a Sept. 5, 2020 wedding date. The couple planned a small justice of the peace ceremony followed by an intimate dinner at Maxwell’s in Fargo.

“Then we got the news that Grandpa Meryl was diagnosed with cancer,” Susan said.

Grandpa Meryl is Meryl Hansey, 84, former mayor of Wahpeton who also worked in law enforcement in the city for years. He moved here in 1965 from Bowman, North Dakota, and is the father of five grown children. He now lives at The Leach Home, which provides basic care and memory support.

“Kurt and Grandpa Meryl share a very special bond and we wanted to ensure Grandpa Meryl would be there for Kurt when we got married, so we changed course and moved the date up to April 10, 2020,” Susan said.

Then news hit that the novel coronavirus pandemic, first identified in China, had spread to the United States. Life as we knew it was put on pause as businesses closed down, many lost their jobs, and those who were still working were most likely doing it from home. Susan and Kurt’s plans for their wedding were canceled.

With no clue as to how long the disease will be around, changing the way we live, the couple again pushed up their wedding date and changed locations to make sure Meryl could be included. They also wanted to respect social distancing guidelines and make sure they were keeping him safe.

“My grandpa has always been an influence in my life. He was in law enforcement and the mayor of Wahpeton. He is an overall great man,” Kurt said.

“He did a lot of handyman work, hanging doors, shingling. It started my interest in the trades.”

On Saturday, May 23, the two spoke their vows to each other as Grandpa Meryl served as his grandson’s best man, standing in the grassy courtyard outside of the Leach Home.

They were married by Kurt’s good friend, Jesse Novotny. Susan also had a commitment ceremony with her new stepdaughter, Addison, thanking her for allowing her to be her “bonus” mom. The couple gave Addison a necklace, which Kurt placed around her neck.

Later, Susan explained that it was important to her to include Addison in the vows, as she herself grew up in a blended family, gaining a stepfather at age 4 who she remains very close to, as well as a stepsister.

“When you marry someone with kids, you really need to commit to it. It’s not just her dad I was marrying. She’s been really involved in the planning,” Susan said.

“We have Addison 50 percent of the time, and Kurt is such a good father and is so involved. I know you can really have a great relationship with your stepkids and stepparents. I just think it’s more people to love, and to love you,” Susan added.

The couple and small wedding party returned to their home in South Fargo for a small reception that includes s’mores around a bonfire.

“Kurt took me out to Hankinson, his hometown, as a married couple this week,” Susan said a few days after the ceremony.

“Susan made this challenge book and one was to have dinner at our high school football field,” Kurt added, so that was checked off their list. He is a 2002 graduate of Hankinson High School.

The couple is excited to be newlyweds, even if their lives and plans were upended by the pandemic.

“We quite enjoy quarantining together,” Susan said, laughing.