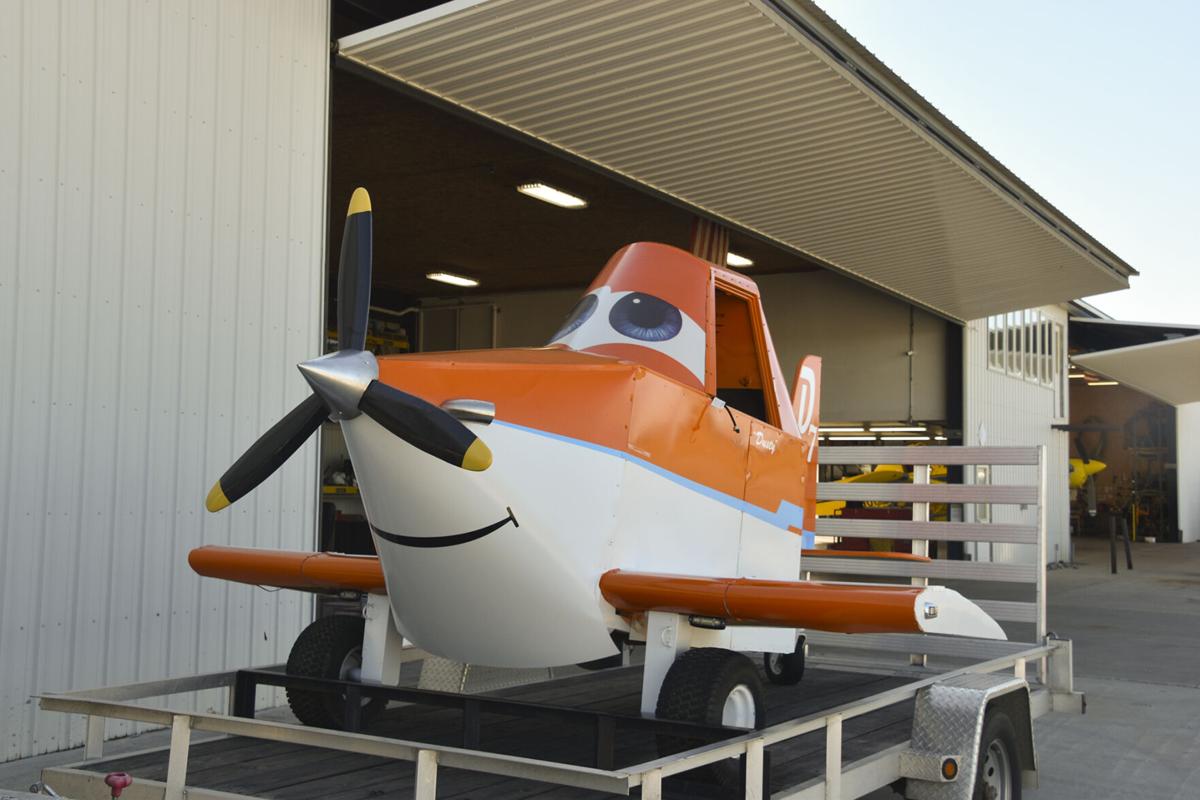 In the movie, 'Planes,' Dusty the spray plane yearns to be a high-flying racing plane, and qualifies by a fluke for the Wings Across the Globe competition. 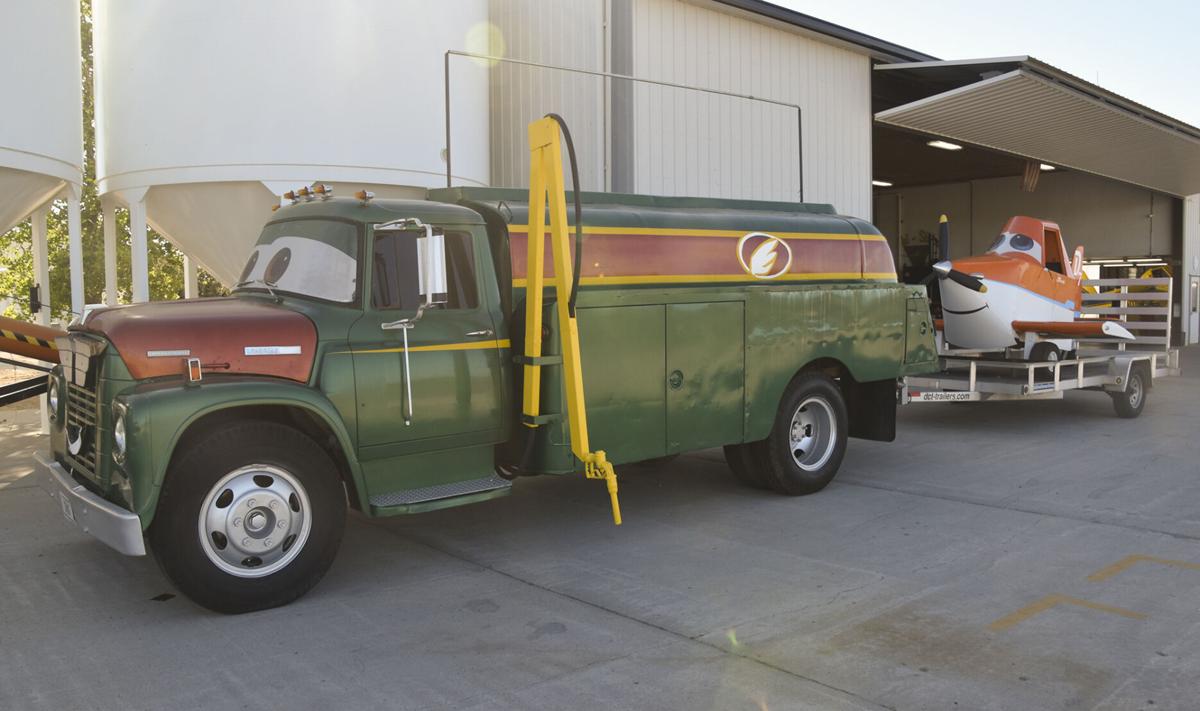 Chug (left) drags Dusty behind him. 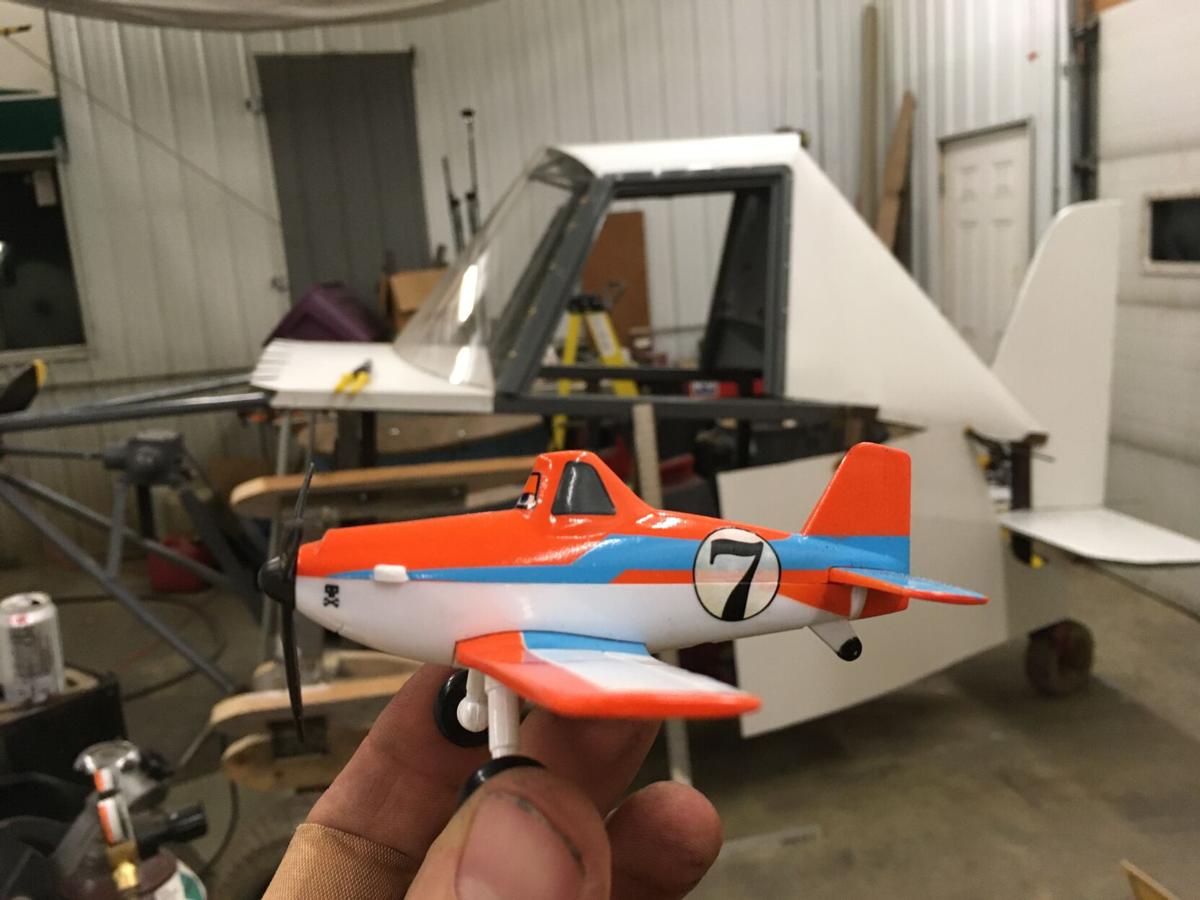 Klindt started the replica years ago from a Snapper lawn mower. He holds a model of Dusty in front of the frame of his replica.

Klindt has worked as an aerial applicator for 25 years, and seeing representation of his profession in media is unusual.

The movie focuses on Dusty, a small-town aircraft with big dreams. Dusty yearns to be a high-flying racing plane, and qualifies by a fluke for the Wings Across the Globe competition with the support of his fuel truck friend, Chug. He comes in last place during one of the legs of the race after he assists a plane that was about to crash.

Klindt said the helper mindset is typical of aerial applicators. It’s not about being the fastest or greatest, it’s about assisting those in need.

When the movie came out, Klindt painted an old fuel truck to look like Chug. He drives the green and red vehicle through local parades, like Blue Goose Days and the North Dakota State College of Science Homecoming parade.

Klindt blasts clips from the movie from speakers built into the cab of the truck. The Yaggies, a local farming family, would drive a small spray plane replica in front of Chug during parades, but it wasn’t recognizable as Dusty without the character’s vibrant orange and blue coloring.

Klindt knew he wanted to create a replica of Dusty to accompany Chug. The recently-completed character made its debut in the Blue Goose Days parade Saturday, June 5.

“What kid doesn’t like a good toy? And I have lots of toys it seems like,” Klindt laughed. “It’s a promotion, too. It’s a way for people to understand aerial application a little bit better.”

Klindt started the replica years ago from a Snapper lawn mower. He first extended the wheels of the mower to the front sides and put one in the back to emulate a plane. His children would drive the frame around the yard, but it sat unfinished until this year.

2021 celebrates 100 years of agriculture aviation and the 100-year anniversary of Wilbur-Ellis, Klindt said. He took it as the perfect opportunity to complete Dusty.

Klindt had the remnants of a spray plane that he originally intended to use for crash rescue training. Instead, he attached the metal frame from the wrecked aircraft to the mower base, and connected a propeller to the front that spins as the mower moves.

Next, he welded steel around the frame. The wings and nose of the plane took a while to mold, Klindt said. He spray-painted the body of the plane and attached vinyl decal lettering and a vinyl blue streak around the sides.

Dave Jawaski, owner of Auto Creation & Signs in Wahpeton, painted the eyes for both Dusty and Chug. From the outside, the windshield looks solid, but from the inside, the driver can see out of the mesh material.

The replica is surprisingly easy to maneuver, Klindt said. The mower has a steering stick on its right side, so Klindt’s other hand is free to throw candy and wave.

“The kids will love it,” Klindt said the Friday before the parade.

Sure enough, the plane was hard to miss Saturday morning. With the front lights flashing, the propeller flipping around and Klindt waving from the window, the crowd was enchanted.

In the future, Klindt said Dusty and Chug may make more appearances at community events like the winter Christmas lights tour in Chahinkapa Park in Wahpeton.

“To me, it doesn't matter if it’s business to Wilbur-Ellis. It’s just aerial application as a whole and just promoting the industry,” Klindt said. “And from that standpoint, it’s good for the kids (to see) that obviously like the movie. Even big kids like me do.”