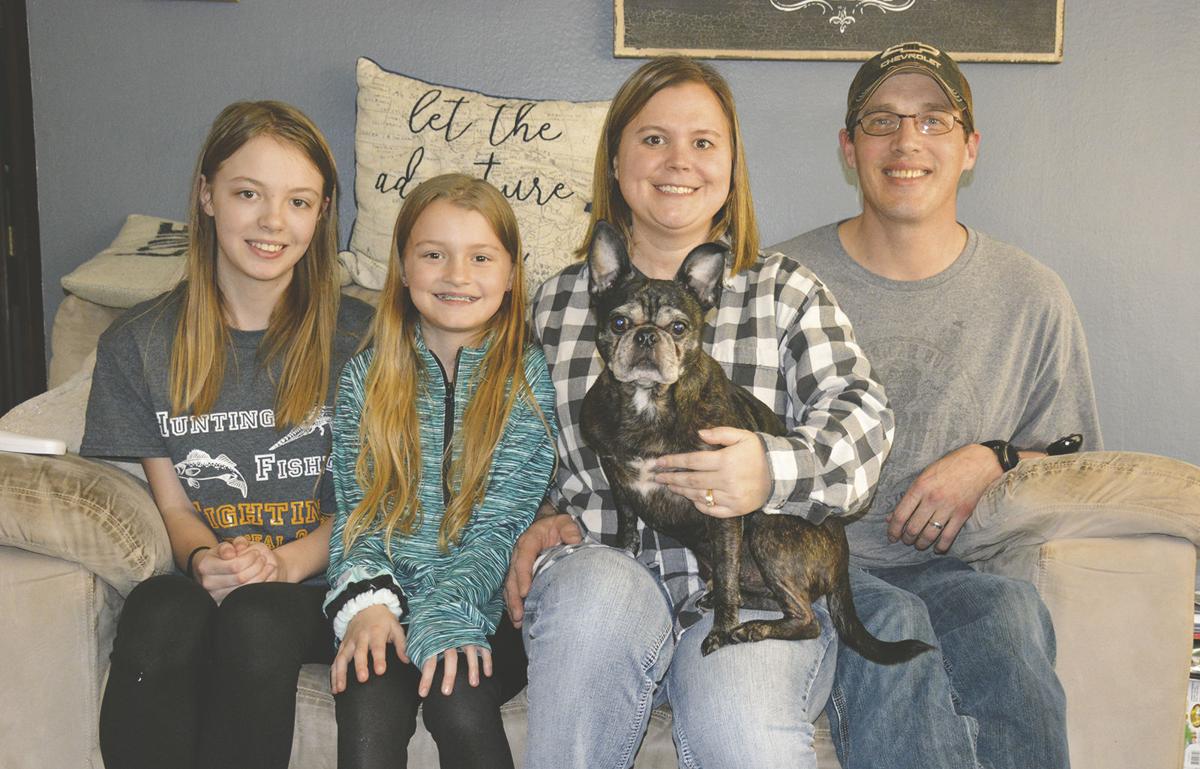 Paul Nelson, far right, is husband to Darcy Block-Nelson (second from right), father to Keisha and Kianna (first from left) and owner of Junior (in Darcy's arms). He's also in remission for appendix cancer. The after effects can be just as daunting as the cancer was, the Nelsons said. 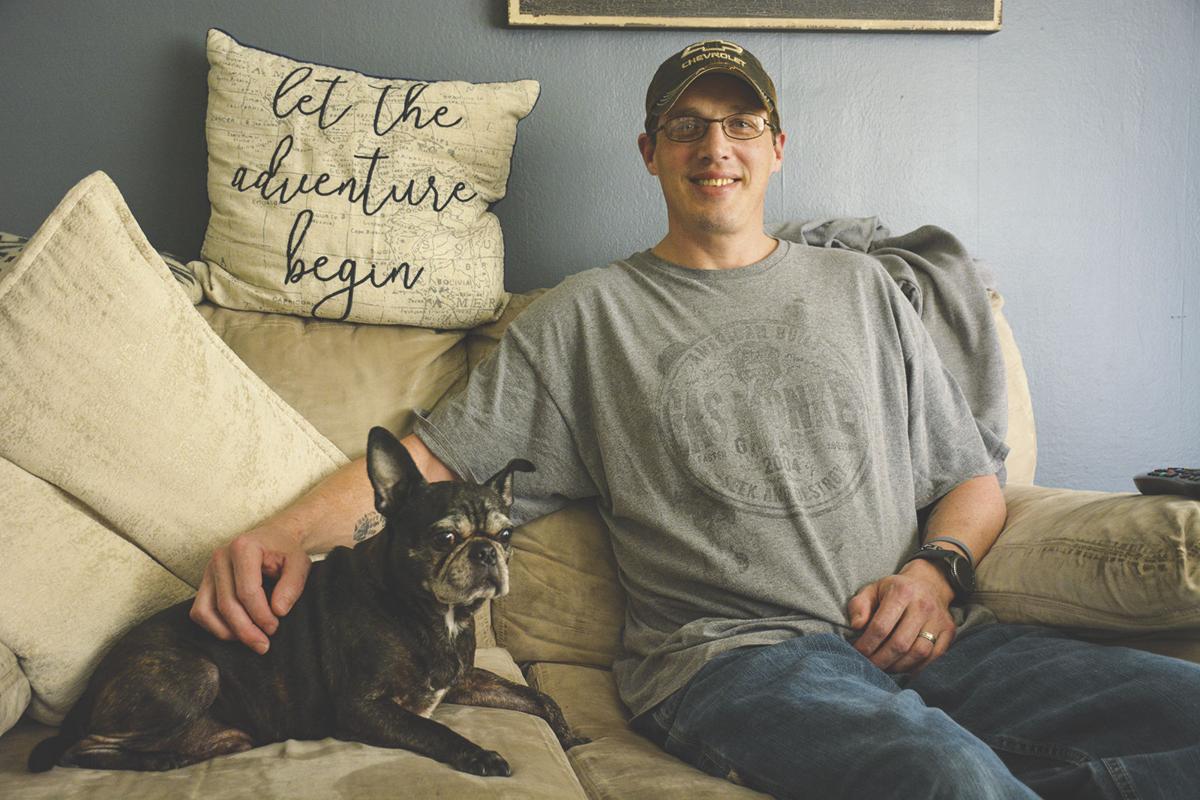 Paul Nelson, far right, is husband to Darcy Block-Nelson (second from right), father to Keisha and Kianna (first from left) and owner of Junior (in Darcy's arms). He's also in remission for appendix cancer. The after effects can be just as daunting as the cancer was, the Nelsons said.

Paul Nelson, Wahpeton, lives his life day by day. In remission for appendix cancer, the 45-year-old is a father of two, dog owner and husband of 16 years to Darcy Block-Nelson.

The Nelsons shared their cancer story at the 2019 Richland-Wilkin Relay for Life. “Heroes of Hope,” the 2020 event, will be an online exclusive on Facebook and Instagram from 3-10 p.m. Saturday, April 4.

Daily News visited the Nelsons, learning more about the family’s life since remission and how it overlaps with Paul’s cancer battle.

Paul Nelson: We did. She did, more or less. I can hardly tell the story without breaking down. Or I hardly could at that point.

PN: Initially, it started in my appendix and metastasized to my colon. So then they had to take out part of my colon. I went through 12 rounds of chemotherapy initially. That didn’t do much. After that, the tumors were still there. I had to go through the HIPEC (hyperthermic intraperitoneal chemotherapy), which is the hot chemo flush of the abdomen. After that, I had to go through 13 more rounds of chemo. From there, I’ve been in remission.

PN: Twenty-five rounds and five major surgeries. It was ugly in the beginning. It was pretty gory.

DN: When were you diagnosed?

DN: You were a patient for more than a year and you’re in remission.

PN: It was a long battle. I had her with me and her pulling me through it the whole time. I’m fortunate I made it. I’m fortunate Roger Maris was so close like it is. And all the people who were praying for me, whether it was local people or distant people. I’m fortunate to have them.

DN: In your speech, you talked about how you really got to understand that there are people who care for you.

PN: For sure, absolutely. The nurses who were here at Sanford in town. The infusion nurses, they were just terrific. Anytime I’d come up there, they’d set things aside if they could and get me right in. They’d get me my fluids and my anti-nausea meds and what not.

PN: It was brutal. There were a couple of times I could barely get from the couch to the car, to even get to Sanford to get the fluids. To walk from here to (the front door) was brutal. There was fatigue and my scar tissue. And the nausea. The diarrhea. Everything was one of top of the next. It was a nightmare. I’m glad I’m through it for the most part.

PN: As long as things keep going the way they are, I’m trying to get back into society. I can’t go back to work where I was. The doctor said I can’t do it.

DN: You’ve got medical reasons not to work at your previous job.

PN: It’s too physical. I was at Wil-Rich in the tool room for 20 years. It’s too physical of work. Once I start working, my abdomen starts hurting. I just gotta shut down, otherwise it gets worse. That’s form the scar tissue.

DB-N: And it will never go away. It will just get worse.

PN: That’s what the doctor just recently told me at my latest appointment. It’s not going to get any better. That’s from the HIPEC. Everything on the inside of my abdomen got burned from the hot chemo flush. Everything’s scarred. All of that’s clamping down on everything.

DN: There’s no way to surgically separate or remove what’s clamping down?

PN: You’d have to take the whole outside of everything off. The HIPEC, they don’t even know everything about it yet.

DB-N: They call it the mother of all surgeries. There was a lady I was following online, she went in yesterday. Eleven hours in and she was still on the table. They go in and they remove what cancer they can see.

DN: Still, you were brave enough to undergo such a surgery.

PN: You should have seen me before the surgery. I was a mess. It’s understandable. It’s tough to go through.

DN: With any situation like this, with every single round of chemotherapy and the surgeries, you must have done a lot of soul searching and had a lot of talk with your loved ones.

PN: It’s tough to talk about, really. I don’t even like thinking about it, honestly. It’s too much. When you start going through this and they start hitting you with this paperwork and information and stuff, it overloads a person. It just takes over everything. There’s nothing else you can do. You’ve just got to put all your time and all your effort into one thing and that’s all you can do. Whether you make it or not is questionable. There were many, many, many nights I was praying to God. Whether I was sitting in the hospital or sitting back here in the bed, I was saying my prayers.

DN: You’re easing your way back into society. Physical work is pretty much out of the question.

PN: As soon as school started, I took a janitorial position. I started three days a week, four hours a day after school. I go and I clean the upstairs and that’s working out great. I get to see my daughter at the end of the day, when she’s coming out of the classroom. That’s just the greatest thing. My oldest daughter is actually working there with me now. The way things are working out now is actually super-great. I couldn’t ask for anything more at this moment. Things are working out.

DN: Once you finished your chemotherapy, Paul, then Darcy had an issue?

DB-N: I think what people don’t understand about cancer — and just talking with other cancer families, I’ve learned this — they think that once you’re done with cancer and you’re done with chemo, too, and you say you’re in remission, people think that’s it, it’s over. But it’s not. You don’t know what tomorrow’s going to bring. You see somebody that’s going back into chemo and you think, “That could be us.”

DN: Would you say that you both have post-traumatic stress disorder?

DB-N: Definitely. I’m being treated for it.

PN: The after effects of what you’ve gone through are important. There’s taking care of yourself and maintaining yourself through the whole thing. Once you’re done with that, you’re onto the next chapter.

DB-N: That previous chapter is always open. It’s never closed. Because anything can trigger you right back to it. You’re living day to day, but a lot of society doesn’t get it. There’s people who have commented that Paul should be back to work (as he was before cancer). They don’t get what he’s gone through. They don’t see what he’s gone through. We as a family — yes, there are people who are worse off than us and there are people who are better off than us. It’s about sticking together and doing what needs to be done under our own circumstances.

DN: This is what sticks with me from your speech last year, the reaction to people’s attitudes.

PN: A lot of people think that once you’re done, you just go right back. Some people do. Some people go right back into what they used to do. But me — I couldn’t go back in the beginning and now, with the scar tissue, I can’t go back ever. People see me driving around and they see me going to work at the school. “Why can’t he work out here if he’s cleaning toilets?” It’s kind of sad.

DB-N: Chemo affects everybody so differently. He’s had so many doses. In the end, he might go forward or the doctor might say to go back. He’s doing everything the doctor’s telling him. That’s what we go by, what the doctor recommends. It’s a lot of just listening to the doctor. You have to listen to your doctor.