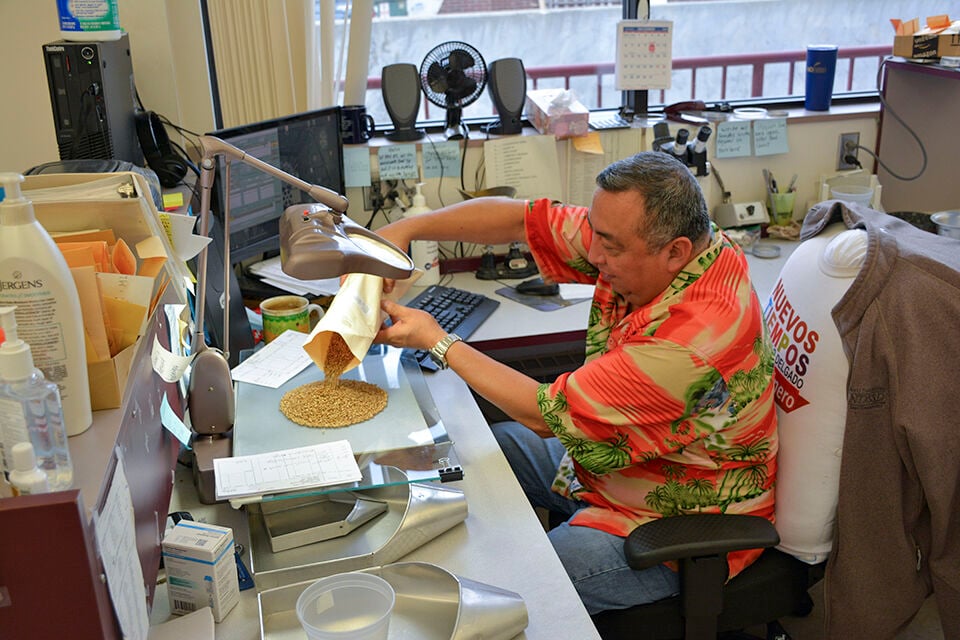 Danilo Martinez, a seed analyst at the ND State Seed Dept., pours out seed to go through a purity exam. 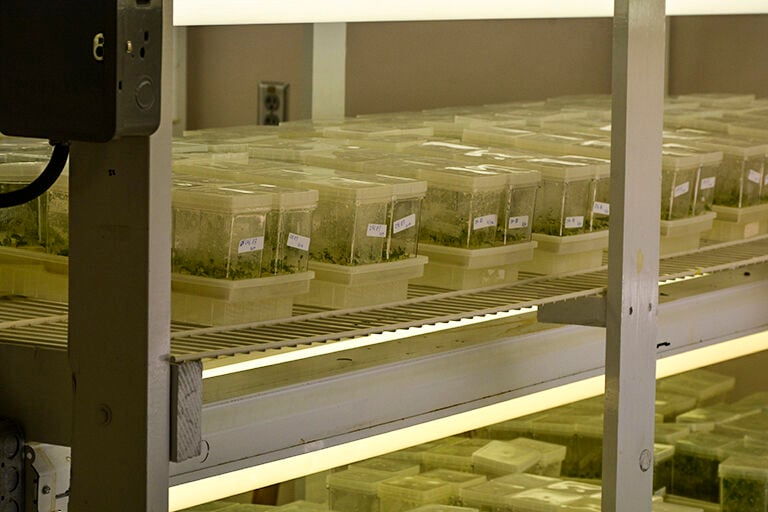 The potato plant nursery, where the ‘mother’ plants are housed. Cuttings are taken from them to start new potato plants. 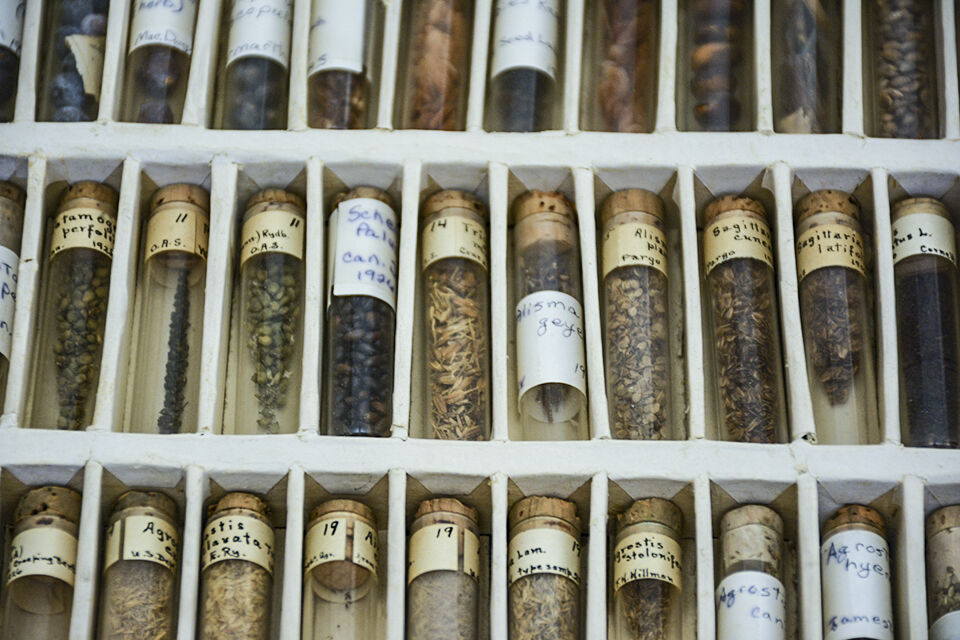 The seed herbarium is a collection of seeds used to identify varieties. Some samples are more than 100 years old.

Danilo Martinez, a seed analyst at the ND State Seed Dept., pours out seed to go through a purity exam.

The potato plant nursery, where the ‘mother’ plants are housed. Cuttings are taken from them to start new potato plants.

The seed herbarium is a collection of seeds used to identify varieties. Some samples are more than 100 years old.

If you have a failure in the field that involves bad seed, you’re either done in that field for the season or you have to replant, which costs time and money — two headaches a farmer doesn’t need.

Ag producers depend on agencies such as the North Dakota State Seed Department to make sure they know what they’re getting — that what they’re buying is actually in that seed bag or truck. They need to know their seed will perform in the field.

This agency, which boasts the largest seed certification program in the United States, is headquartered in Fargo, North Dakota.

Ken Bertsch, seed inspector with the agency, and Jason Goltz, regulatory program manager, gave us a tour of the 32,000-square-foot facility in December 2020. It’s housed on the campus of North Dakota State University.

“During soybean season, I may be out inspecting a field for certification, but maybe a company is working with us to inspect their quality assurance fields, as an objective third party. We’ll inspect the field and report back to them what we find,” Goltz said.

“All of those samples come through here, are entered in the system, then get distributed to seed laboratories, of which we have two,” Bertsch said.

The state seed lab does all the seed quality, purity and germination tests. All the regulatory samples come through this laboratory.

“We love to talk about this. There’s a general knowledge that there is a seed department, but nobody really knows much about it,” Bertsch said. “We like to say it’s a hidden gem, but that may be overstating it.”

Every single field that someone wants to raise for seed has to comply with the ability to produce seed, Bertsch explained. The ag producer sends in an application to the agency and the field is inspected in the summer. Once it’s harvested, samples are sent into the seed lab. Identifying information of the samples is entered into a computer that runs a customized software program.

In the seed lab, there is a germination lab and a seed purity area, where samples are run to see what’s in them.

Jeanna Mueller, seed lab manager, showed a grass mix sample that had five components or types of grasses, in it.

“We go through and separate all the components and we germinate each component to see how well it does,” Mueller said. “Sometimes it becomes a regulatory issue if it’s pulled from a regulatory department. Sometimes it’s just a customer, a large company, that sends in a pasture mix.”

She said they typically get samples of small grains, including durham and soybeans, to test.

Seed samples are put in a germination chamber under a certain temperature, humidity and time setting for an accelerated aging test, which tests the vigor of the seed. It stresses the seed, putting them in a high heat, high humidity environment for three days to mimic a more saturated and stressed field condition.

One-hundred seeds go on a rolled, moist towel for germination and examination by analysts, for a specific number of days, depending on the seed. The layman may try it from home, but it’s not the same accurate picture of what can be done in the lab.

“We have some farmers who say, ‘I threw it on a paper towel with some moisture at room temperature, for 4-5 days.’ It is similar, but we have controllable temperature and humidity and heat, and our tests are repeatable,” Mueller explained. “That’s what we strive for, repeatable tests. So essentially any farmer could send it to any lab around the nation and get the same results.”

“The farmers doing it at home, they see that thing’s throwing a root, and say, oh that’s a viable seed,” Bertsch added.

The analysts look for essential structures, including shoots and roots.

“If you have a garden crop at home, and you don’t have sufficient roots or shoots, the seed can’t get the nutrients it needs,” Mueller said.

For every crop that comes in, standards are used to compare essential structures, following AOSA (Association of Official Seed Analysts) rules for testing, a nationwide testing standard.

Over on the seed purity side of the lab, analysts are examining seed samples for broken kernels, inert matters and different crops or seed types that are considered contaminants, along with noxious weeds.

The lab also contains a seed herbarium, which could be compared to an encyclopedia of seeds. There are samples of seeds going back over 100 years. Each sample is stored in a glass tube and labeled with identification, including the year. This collection helps analysts identify seed samples if they are unusual.

The diagnostic lab is part of the seed lab but is located in a separate room. There, testing for seed health is done, along with testing for variety identification, seed/trait testing and potato virus and disease testing. DNA testing and electrophoresis are used to identify varieties.

Seed stock and Diagnostic Laboratory Specialist II Sue Merkens oversees this area. She works in the potato seed stock program and the plant pathology section of the diagnostic lab.

“It’s really technical stuff,” Bertsch said. “Sue is a microbiologist by trade which fits well with plant disease testing. Hilary has a bachelor’s in biotechnology and microbiology, and master’s in microbiology.”

Hilary Hafner, a specialist I, does variety identification testing on the seed samples. Hafner explained how it works.

She uses a coffee grinder to turn wheat into flour and extracts the DNA, which is put on a slab of polyacrylamide gel which goes through a chamber. With electricity, it’s separated by size and in the end, it’s stained to get a visual picture.

“I then match the ‘fingerprint’ to the control,” Hafner said. “You can see these are different varieties, they have to match on every band, then I take a picture of it. That’s the visual ID.”

In addition to the seed department, there is a modern tissue culture and greenhouse wing which provides foundation potato seed stocks to the North Dakota potato industry.

Technicians there do ELISA (Enzyme-linked immunosorbent assays) testing on potatoes, which is used to test for viruses.

“Potatoes have mostly viral problems, which is different than the whole mess of fungal tests for other crops,” Bertsch said.

Within the potato seed stocks wing is the variety-clone repository, the tissue culture lab and foundation seed production. Potatoes are grown from “mother” plants. This particular section of the lab is sterile and entrance is limited to those working in this lab. Precautions are taken, including removal of footwear, so nothing is tracked into the sterile space. Bertsch joked he had been inside there only once in the 21 years he has worked at the facility.

“For each (variety) of the potatoes, we have these plants started and the auger is sterilized before we put the plants in. If someone puts in an order for a certain variety of potato, we get them from these mother plants,” Merkens said.

Brianna Tufte, a lab technician II, is the lead in the tissue culture lab. She explained how new plants are grown from the mother plant.

“We cut these at the nodes and put that in new media, and those will grow new plants,” Tufte said. “We’ll keep doing that until we get enough to fill the greenhouse. We’ll cut 25 nodes off the mother plant — once we get one box of 25, that can make 3-4 new boxes to fill the ‘delis’ and there’s 50 in each deli.”

The team has to work backward from a customer’s order, to know how many plants will be needed to fill the order. For example, if an order comes in for 100 pounds of Red Norland, they know they can get about 40 pounds to a bench (farming table), so they would need to fill 2.5 benches, Merkens explained. A bench can hold 550 plantlets.

“It’s multiplying from one plant into field production. We’re producing nuclear seed,” Bertsch said. “They produce a tuber, a tiny potato, and those get planted in the field. We produce about 8,000–9,000 pounds (annually) and that’s enough to plant, let’s say, 100 acres of potatoes in the field, which will then produce approximately 10 times more and the following year, 10 times more. It’s a factor of 10.”

Two potato crops can be grown inside the greenhouse per year — one is planted in the spring and one at the beginning of July.

Once the crop of tubers is harvested, it goes into a big refrigerator room for cold storage. The 2020 summer crop that was harvested last October will stay in cold storage until it’s delivered to farmers in April or May.

The cold room and greenhouse temperatures are monitored by a computer system.

“If anything goes awry, the system calls my phone and we can take care of the problem,” Merkens said.

The North Dakota State Seed Department is governed by the State Seed Commission, a nine-member board represented by agriculture organizations throughout the state. For more information on the agency, visit www.seed.nd.gov.