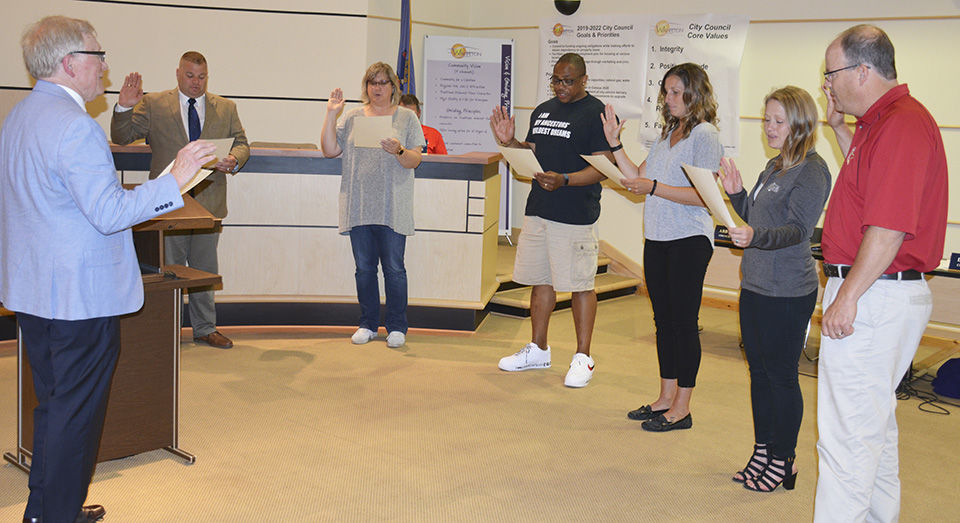 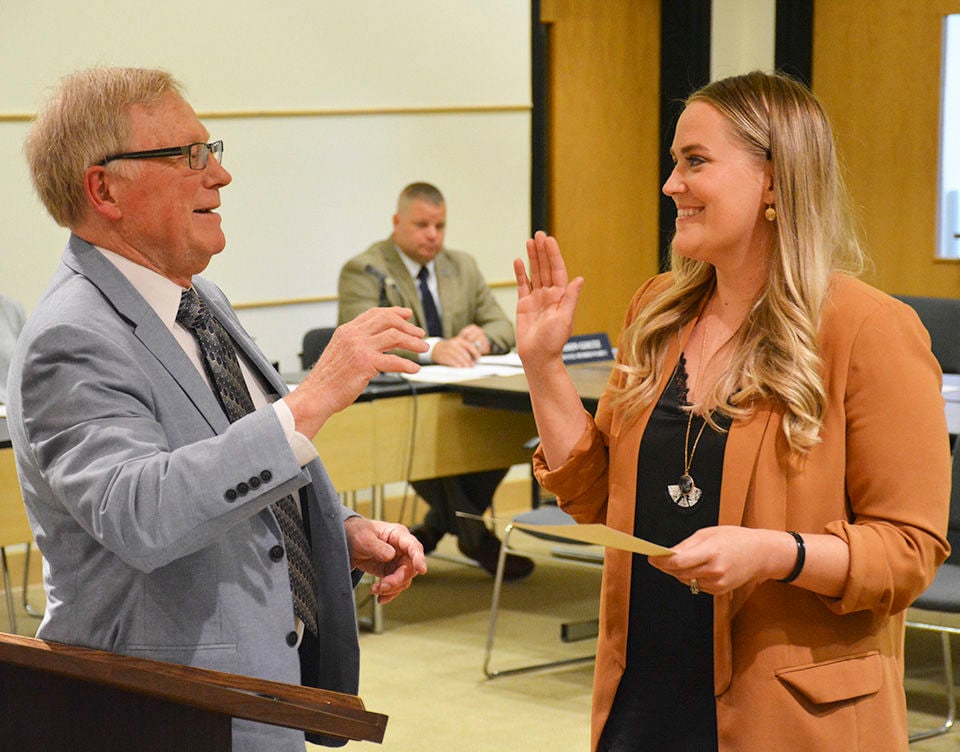 Change and continuity were provided in near-equal amounts when the Wahpeton City Council held its reorganization meeting Tuesday, June 23.

“I am my ancestors’ wildest dreams,” Woods’ shirt read.

Woods is presumed to be Wahpeton’s first elected African-American official. With the election of Bohn, Fobb and Heitkamp, the council also has three women serving for the first time since 2014.

Fobb and Heitkamp are the sixth and seventh female Wahpeton council members since Donna Keogh’s election in 1994. Bohn’s experience includes serving the 3rd Ward and then as an at-large councilwoman. Lambrecht previously served the 3rd Ward before running for at-large office.

Councilman at-large Lane Wateland was re-elected to the council presidency. He was nominated by Lambrecht. Saying Wateland understands the city of Wahpeton, Lambrecht gave a rundown of his achievements.

Earlier in the meeting, Wahpeton Mayor Steve Dale nominated Bohn for the council presidency. He singled out her depth of knowledge and ability to ask needed questions, particularly in regard to capital improvement projects.

“She has the ability to sort nicety from necessity, (as) I call it,” Dale said. “When you’re talking about millions of dollars, it’s certainly an added plus.”

Bohn motioned to cease nominations and cast a unanimous ballot for Wateland’s election. Shortly after, Lambrecht was re-elected as council vice president. Giving the nomination, Wateland said he’s going back to what Lambrecht said about him.

“Brett’s born and raised here,” Wateland said. “He cares about the town. He has a lot of knowledge from his past terms on the council.”

After the council leadership was determined, Mayor Dale announced the appointments to council committees. The Finance, Personnel and Economic Development Committee will consist of Chairman Wateland, Vice Chairman Lambrecht, Fobb and Goltz. The Public Works and Safety Committee will consist of Chairwoman Bohn, Vice Chairman and Councilman at-large Kelly McNary, Heitkamp and Woods.

“I am grateful to the mayors and council members who have selflessly served the city during my tenure as city attorney,” Lies wrote. “This is especially true during challenging times when hard decisions had to be made, and often times no matter what the decision was going to be, there were going to be several disappointed persons.”

Hatting, who has spent eight years with the city attorney’s office, praised Lies. He began working for Wahpeton in 1975, “when I was 12,” Lies joked. The council approved the appointment of Lies as assistant city attorney.

“I have been exponentially blessed to work with Steve,” Hatting said. “I have benefitted immensely from his mentorship and his friendship. He leaves a legacy that will be very hard for me to live up to, but I’ll do my best all the same.”

In other news, with unanimous votes:

• Brian Steeves was appointed to a five-year term with the Airport Authority. Brenda Koppelman was appointed as the authority’s clerk.

• Deborah Loberg and Jeannette Plummer were appointed to three-year terms on the Leach Public Library Board.

• Councilman Goltz was appointed to a four-year term on the Southeast Multi-County Agency (SEMCA) drug task force board.

• Chairman Damon DeVillers, Rick Arenstein and Brandon Cook were appointed to five-year terms with the Planning Commission. Councilwoman Bohn was appointed to serve the completion of a term ending in 2024.

• Chairman Devry Klocke and Shannon Schillinger were appointed to three-year terms with on the Zoning Adjustment Board.

Seven women have served on the Wahpeton City Council since 1994. They are: