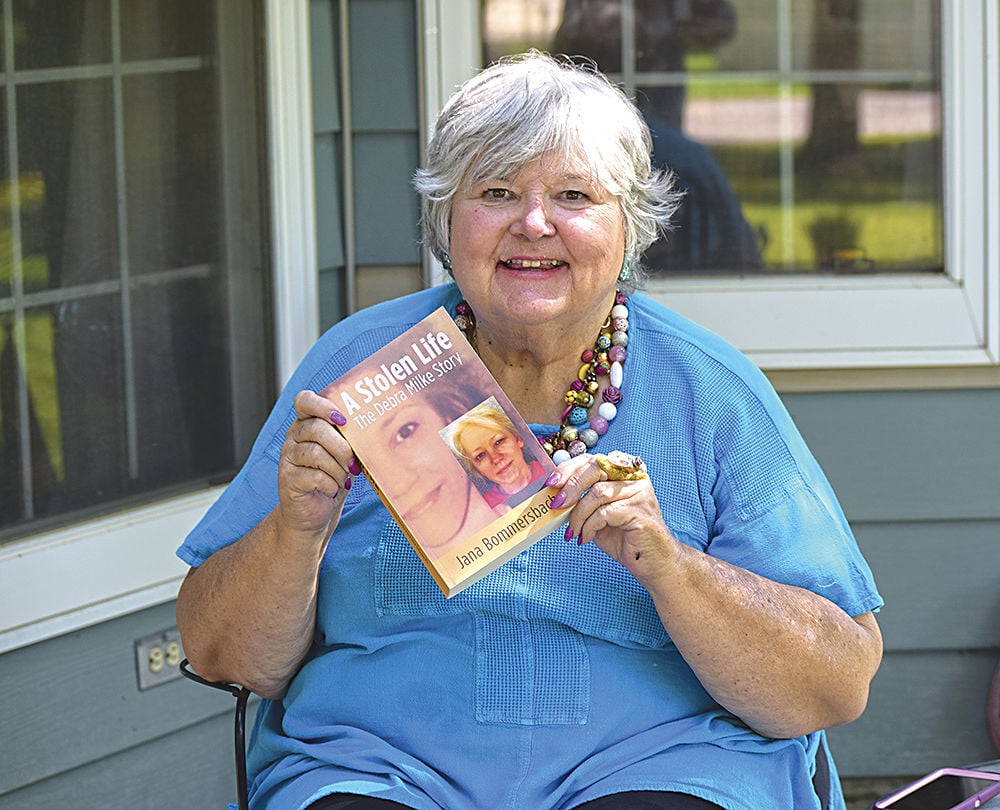 North Dakota native Jana Bommersbach holds her seventh novel, ‘Stolen Life,’ while sitting in the backyard of her mother Willie Bommersbach’s Hankinson home. This was where she write the story about Debra Milke, convicted and sentenced to death for murdering her son in 1989. 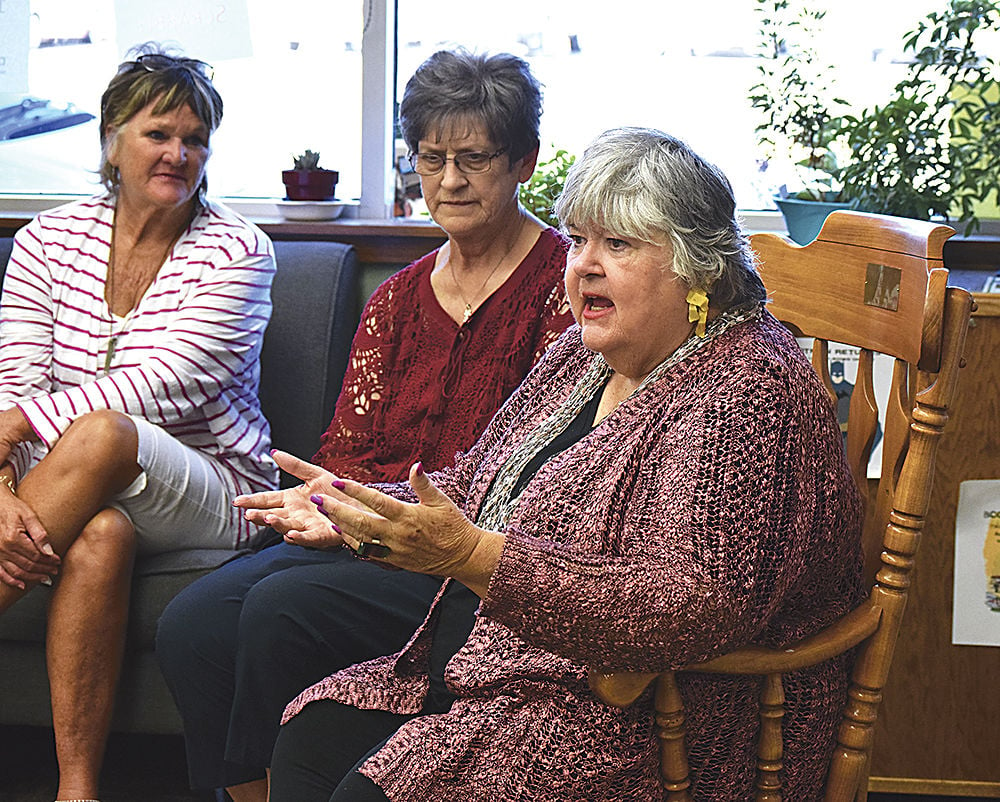 North Dakota native Jana Bommersbach holds her seventh novel, ‘Stolen Life,’ while sitting in the backyard of her mother Willie Bommersbach’s Hankinson home. This was where she write the story about Debra Milke, convicted and sentenced to death for murdering her son in 1989.

“That woman is guilty as hell.”

Bommersbach is an acclaimed Arizona journalist and novelist who read the headlines, appalled a single mother could do something so heinous, and right in front of Christmas, she said.

“I was convinced the only woman on Arizona’s death row was guilty as hell. It was this horrific thing that happened in 1989 that riveted the country,” Bommersbach said.

Turns out, most Americans agreed with this verdict, other than her attorney, a prosecutor and prison counselor who believed Milke was innocent.

Few believed Milke’s proclaimed innocence. After all, the Phoenix Police Department had its ace in the hole, Detective Armando Saldate who said Milke confessed all her sins to him. He couldn’t offer proof since he didn’t tape the interview, have it witnessed or offer up a signed statement from Milke confirming her confession. There was no evidence other than Saldate’s word — the word of a “dirty cop,” said the Ninth Circuit Court of Appeals years later.

This sounds like the plot of a book. In fact it is as Bommersbach released her seventh book, “Stolen Life,” which goes beyond the headlines to tell Milke’s story, of how she was found guilty by a legal system that lied to frame her.

Bommersbach sat in a rocking chair at Hankinson Public Library, surrounded by 25 people. Many held a copy of Stolen Life for Bommersbach to sign after listening to her talk about her latest book, of how she went through 20,000 pieces of paper to write Stolen Life. Bommersbach interviewed everyone involved, other than the Phoenix detective Saldate when his attorneys refused her request, “for good reason,” she said.

It wasn’t until the federal Ninth Circuit Court of Appeals threw out Milke’s conviction and death sentence in a scathing opinion that said this case was “a severe stain on the Arizona justice system” that Bommersbach took an active interest, she said.

It didn’t take Bommersbach long to determine there were huge flaws in the state’s evidence, she said. Up all night, she sat at her computer to read the Ninth Circuit’s opinion. What she found was chilling.

“If half of what they are saying is true — I mean half — this is an innocent woman who has been railroaded,” Bommersbach said. But people don’t just go to jail if they are innocent, she thought. “There has to be something there. You don’t convict somebody for 25 years without nothing there. Right? Says naive me.”

There were deep holes in the state’s case, Bommersbach was to discover. The state of Arizona said Milke sent Christopher to his death. They said she convinced two men to do it for her.

First they said she had taken out a $5,000 life insurance policy on the boy and wanted to collect. Bommersbach discovered this policy was part of Milke’s benefits package at work that every other employee had as well.

Then the state said she wanted to be free for a new boyfriend who didn’t want kids. Changing their tune again, the state then claimed Milke didn’t want Christopher to grow up like his alcoholic-druggie father. They said they knew all this because Milke confessed to a 20-year veteran of the Phoenix Police Department. There was nothing but his word that she poured out her heart and confessed to ordering her son’s death.

It wasn’t until 2013 that the Ninth Circuit told Arizona that it “should be ashamed” of convicting Milke on a confession that “probably never happened,” ordering she either be set free or receive a new trial.

The county attorney wanted to retry Milke’s case in 2013. “If Saldate is lying, the whole case falls apart,” Bommersbach told those at Hankinson Public Library Wednesday morning. Despite a continued lack of evidence, it still took two years of dragging their feet before Milke was released with prejudice, meaning she can never be tried in this case again, Bommersbach said.

Bommersbach asked her Hankinson audience these questions, “Did Christopher frustrate her? Of course, he was a child. Did she yell at him? Yes. Did she need a break now and then from being a single mother? Sure. Did she love him? There was never a doubt,” Bommersbach said.

She points to these facts — a mother who wants to have her son killed doesn’t have new clothes or Christmas presents for him hiding under her bed, doesn’t brag about him in the new company newsletter, doesn’t create a Halloween party for him and his friends because she’s afraid to let him go trick-or-treating in their Phoenix neighborhood, Bommersbach said.

Later, officials reviewed 7,000 hours of evidence in Saldate’s various cases and found 18 where his claim of confession was overturned by courts. Bommersbach claims in Stolen Life the Phoenix Police Department knew Saldate was dirty and yet kept sending him in, she said. In Milke’s case, he interviewed her for 25 minutes, then the police department claimed they captured the killers within 24 hours.

Stolen Life ends with these prophetic words from its author, “After spending a quarter century writing off Debra Milke as a baby killer, I now know this: I have never been so wrong.”

Bommersbach self-published this book, which is available by demand at Amazon.

OTHER BOOKS BY JANA BOMMERSBACH:

Bones in the Desert — Loretta Bowersock and her daughter, Terri, ran a multimillion-dollar “gently used” Terri’s Design and Consign furniture store based in Tempe, Arizona. Loretta went “missing” just before Christmas in 2004. What Terri found was a living nightmare of buried secrets about elder abuse and domestic violence.

A Squirrel’s Story — Her first children’s story follows Shirlee Squirrel, who needs a safe nest for her babies, far from the clutches of a menacing black cat.

Cattle Kate — Ella Watson is the only woman ever lynched as a cattle rustler. History called it “range land justice” when she was strung up in Wyoming Territory in 1889, tarring her as a dirty thief and a filthy whore. But history was wrong. It was all a lie.

thedeadgirlinthevacantlot — Joya Bonner knew nothing about the world of sex trafficking—or the ugly status her city held in this filthy underground. But then her 15-year-old honorary niece went missing in Phoenix. And a 13-year-old from her hometown in North Dakota disappeared.