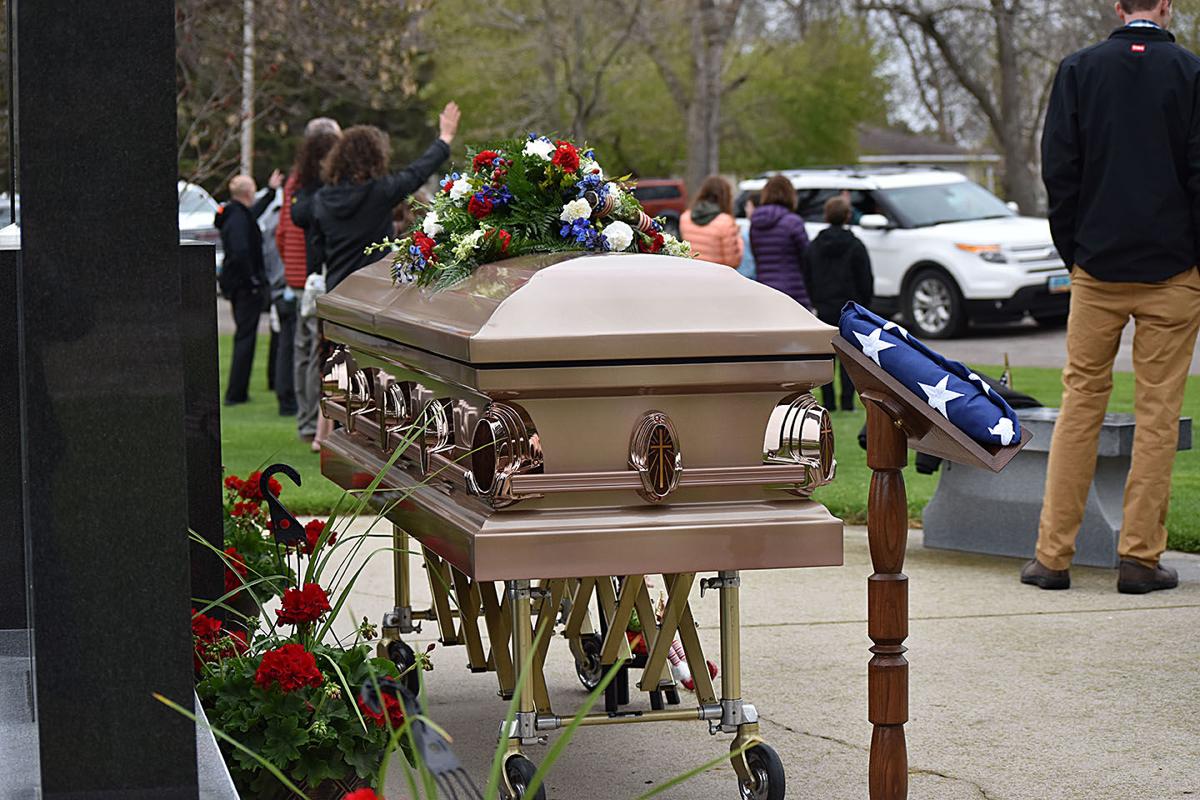 In a casket beside the Veteran’s Memorial he helped create lies Delmer ‘Stuffy’ Steffens, who died Friday, May 8. A private family funeral service was held Wednesday, May 13, following by a drive-by visitation outside the memorial site. It took about 40 minutes for the slow processional to pass by the memorial. 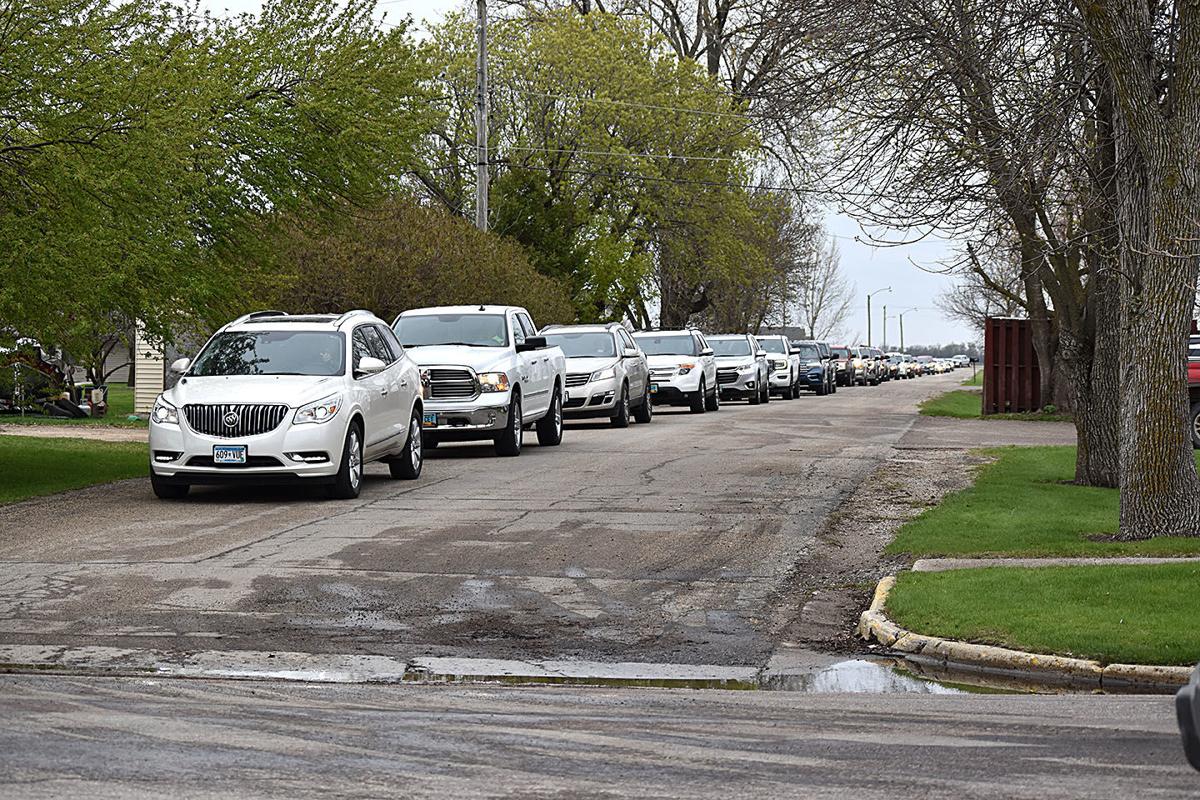 Vehicles are lined bumper to bumper as they wait their turn to drive by the family of Delmer 'Stuffy' Steffens. 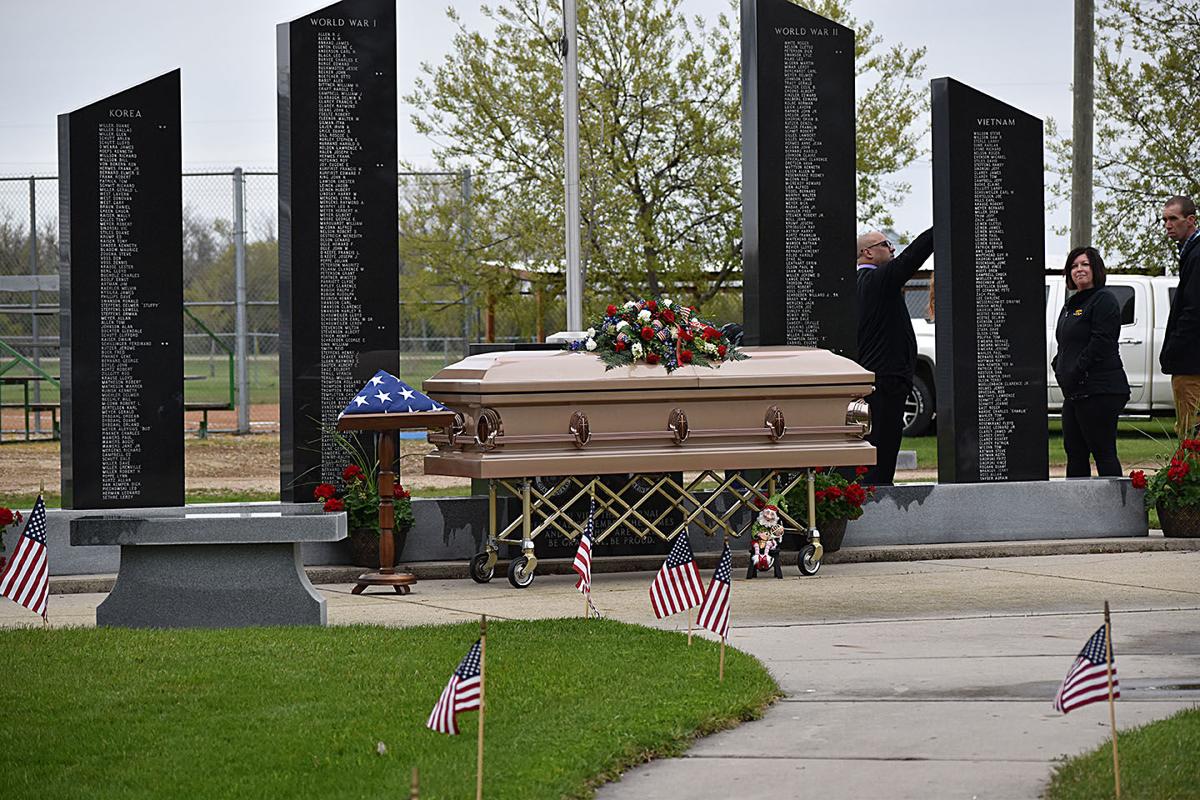 Stuffy Steffens helped build the Veteran's Memorial at Fairmount, which is near the public school. 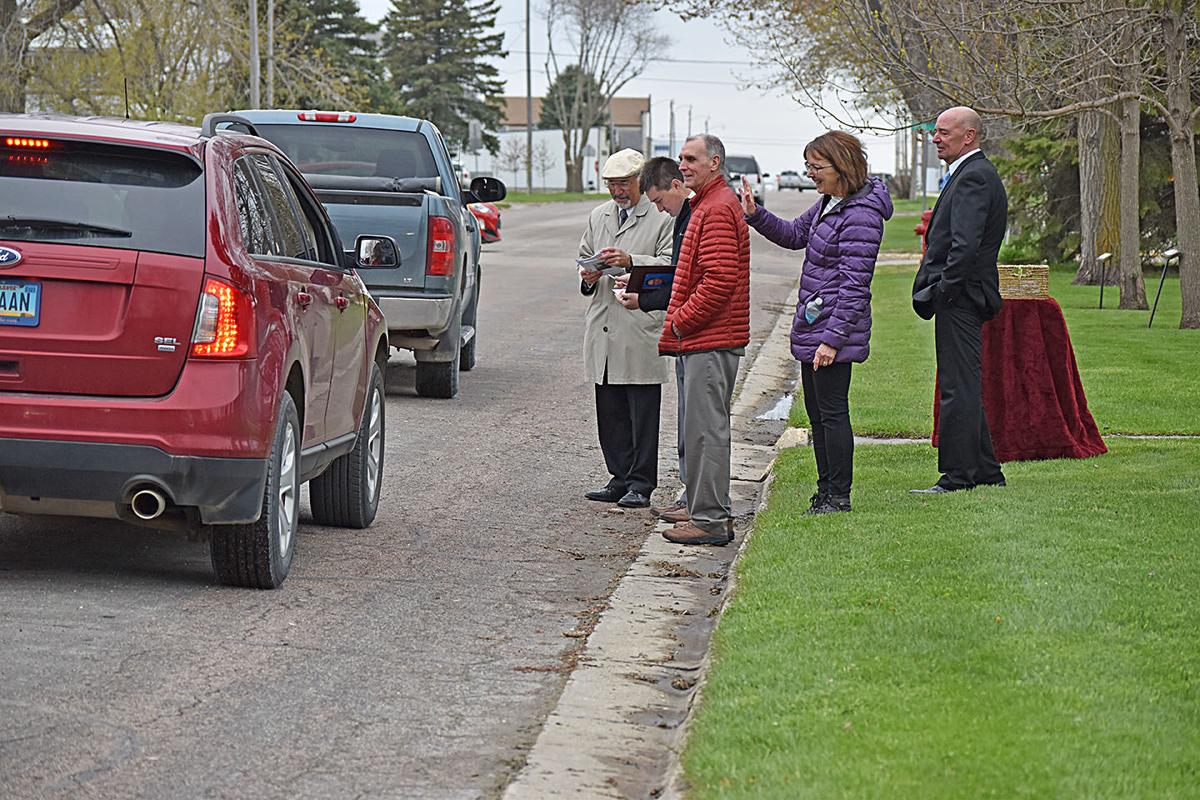 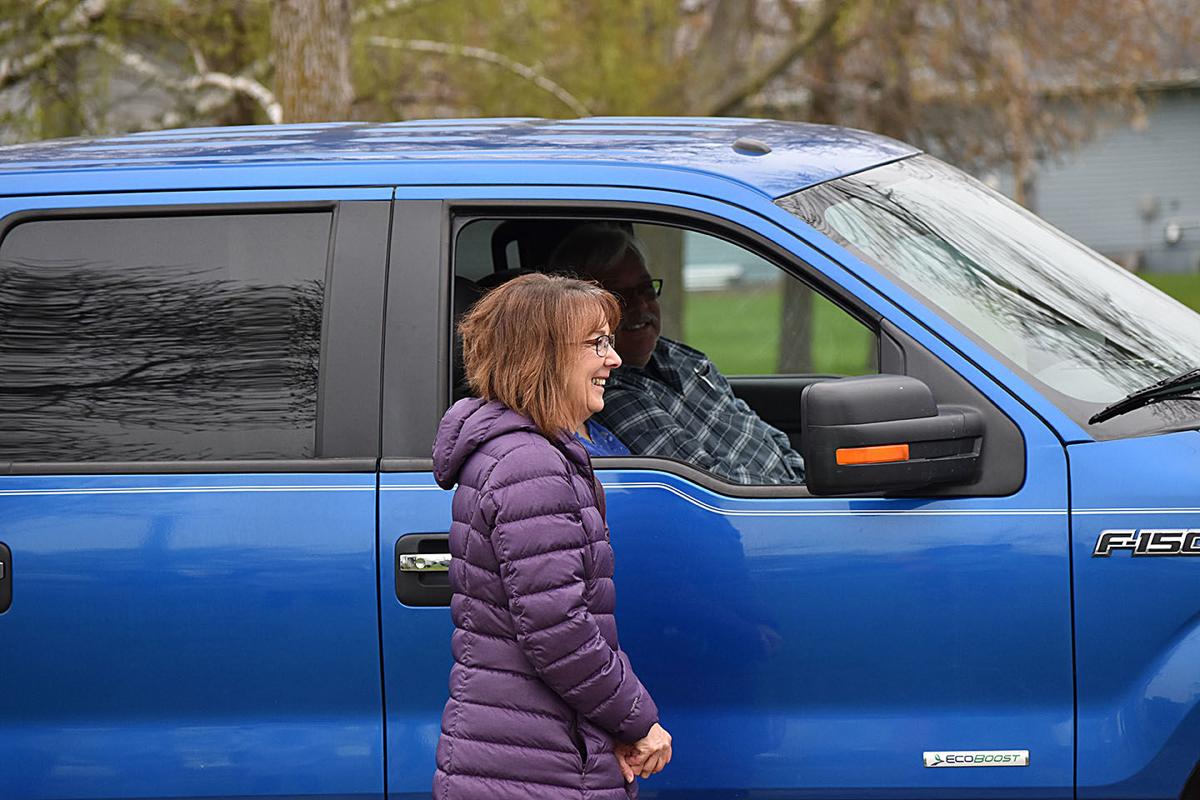 Lori Miller chats as vehicles slowly drive by in this unique visitation. 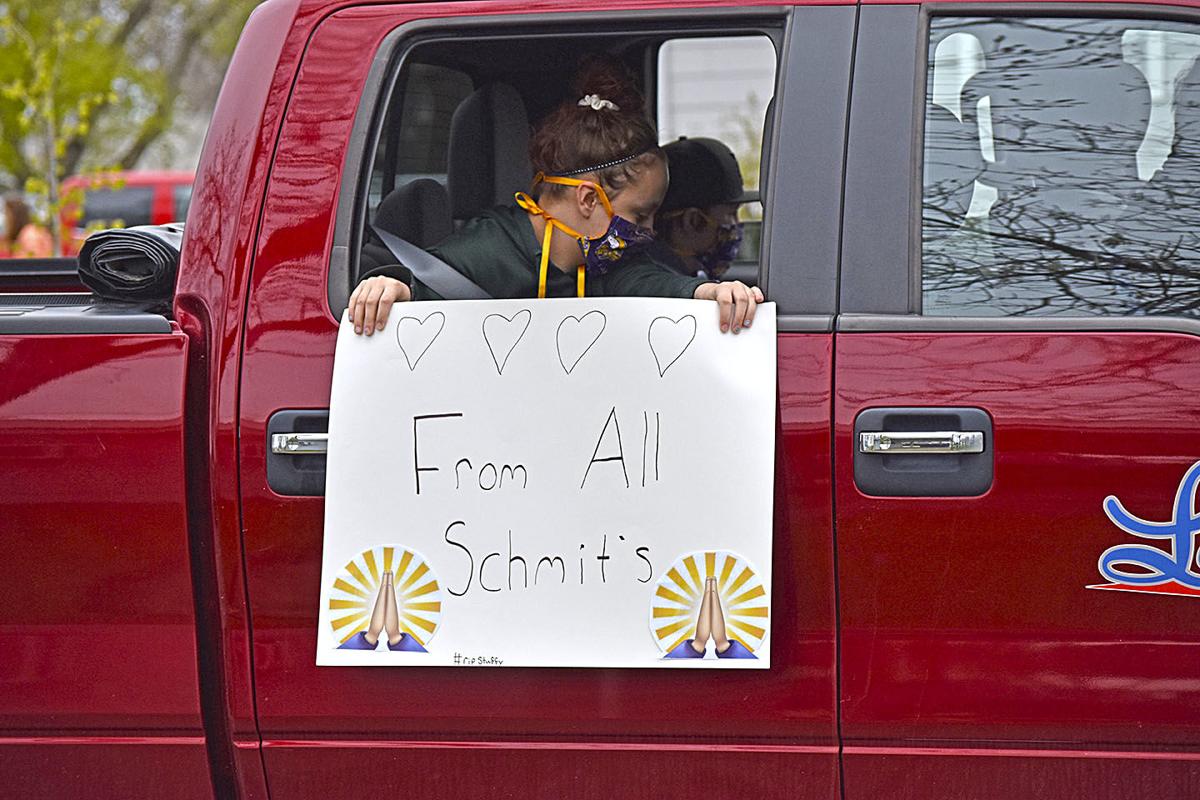 This sign decorated one vehicle during the honorary processional. 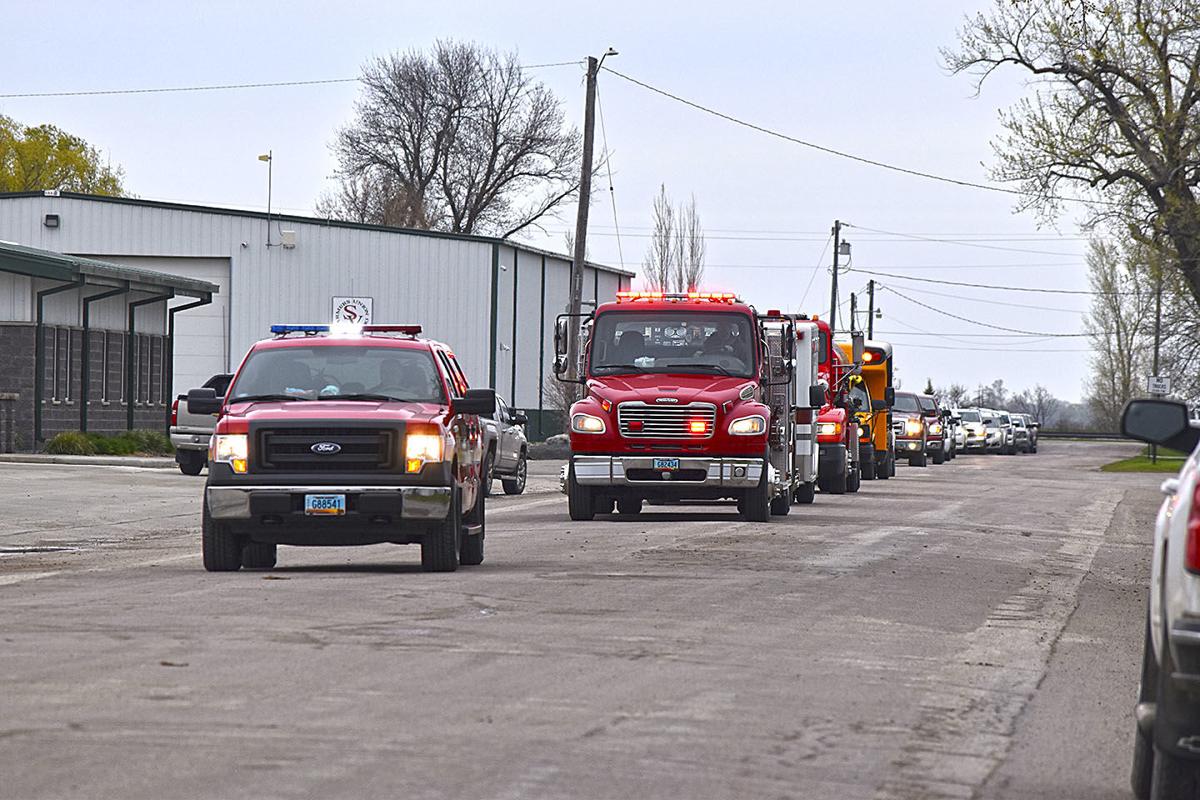 Fairmount fire trucks led by slow processional through town and then past the Veteran's Memorial. 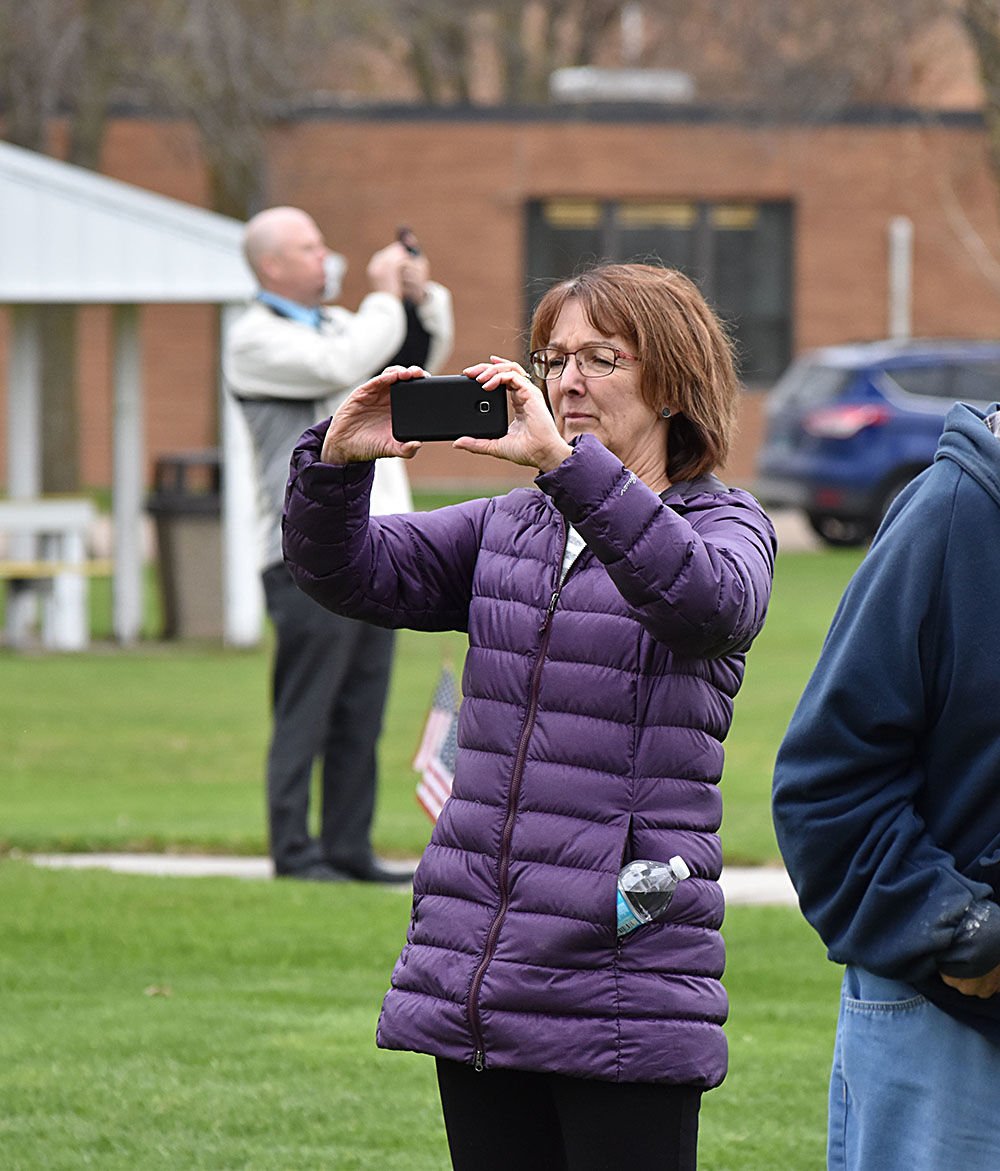 Lori Miller uses her phone to videotape the drive by visitation.

In a casket beside the Veteran’s Memorial he helped create lies Delmer ‘Stuffy’ Steffens, who died Friday, May 8. A private family funeral service was held Wednesday, May 13, following by a drive-by visitation outside the memorial site. It took about 40 minutes for the slow processional to pass by the memorial.

Vehicles are lined bumper to bumper as they wait their turn to drive by the family of Delmer 'Stuffy' Steffens.

Stuffy Steffens helped build the Veteran's Memorial at Fairmount, which is near the public school.

Lori Miller chats as vehicles slowly drive by in this unique visitation.

This sign decorated one vehicle during the honorary processional.

Fairmount fire trucks led by slow processional through town and then past the Veteran's Memorial.

Lori Miller uses her phone to videotape the drive by visitation.

His daughter Lori Miller of rural Fairmount talks about how her mom, Leola Steffens, said there was no such thing as a quick trip to the grocery store since Stuffy always found someone to talk to on their outings.

When he worked the monthly Fairmount American Legion breakfasts — which he organized for 31 years — someone always wanted to talk to Stuffy, pulling him out of the kitchen. Eventually Stuffy was put on PR duty, meaning he could walk around and just talk.

Those are fond memories for Stuffy’s family. Memories are what they have left, and stories — many, many stories after this Fairmount icon passed away Friday, May 8 at a Fargo nursing home.

How do you grieve?

Coronavirus changed the way the Steffens family is able to grieve for their dad, grandfather and great-grandfather since large gatherings are not being held. He was a big part of the community, so friends and neighbors wanted to grieve as well and support the family, but visitations at funeral homes and churches are not allowed.

The Steffens family opted for a drive-by visitation so people could honor a man who helped build important destinations in Fairmount, like the American Legion baseball field and Veteran’s Memorial.

Wednesday morning, Stuffy’s family held a private funeral service, then gathered outside at the Veteran’s Memorial. Miller called this tribute very personal for her father because of how important the memorial was to him. Stuffy’s casket sat in front of the marble pillars filled with veterans’ names as cars passed in a slow procession that took about an hour from start to finish.

Led by Fairmount fire trucks, the procession started on the city’s western edge at Farmers Union Oil of the Southeran Valley, then passed through town until it reached the family gathered at the Veteran’s Memorial. With their lights on, cars lined bumper to bumper would have stretched the full length of this southeastern North Dakota city, while waiting their turn to pass by, wave and offer a watery smile for some.

“We didn’t have a clue what to expect. If this had just been a normal time, we would have had a funeral and then gone to the community center. That would have been the end of it. This way, my dad got to be in a place he loved the most, across the street from the house he lived with my mom almost their whole married life, across from the field he helped build,” Miller said.

Steffens, 90, had been a fixture in Fairmount his entire life. Quick witted and ready with a smile, he worked during the day at Steffens Insurance Agency, which is run by his son Kirby Steffens. Stuffy answered the phones, collected the mail and did countless tasks to keep himself busy. He also organized the monthly Fairmount American Legion breakfasts, until he became a resident at Bethany Homes in Fargo as he tried to recover from a bacterial infection in the left hip he had replaced years ago, Miller said.

He has five children — Miller, Kirby of Fairmount, Monty Steffens of Randall, Minnesota, and Marty Steffens of Fargo. His son Randy Steffens has passed away, as has his wife Leola.

Coronavirus closed nursing homes, so family members were unable to visit Steffens for two months, until hospice called to say Stuffy had taken a turn for the worse. They were allowed two at a time into his room. That first visit in months, Miller said he seemed full of vim and vigor as she and brother Kirby visited first, followed by Monty and Marty. That was Saturday, May 2.

Bethany administrators let them know a few days later a staff member had been diagnosed with coronavirus, so the family opted not to visit again to protect him from this disease that hits the elderly particularly hard, especially those with underlying health issues.

Hospice called a few days later to say Stuffy was failing and that his passing would come sooner than later.

“My cell phone rang at 6:30 in the morning Friday and I knew dad had died. No one else calls my cell that early in the morning. Staff were with him and said he died very peacefully,” Miller said, her biggest fear that no one would be with him when he passed. “He’s with our mom now. That’s how we look at it. He missed her so much.”

There still are a few loose ends the family has to make decisions about. Since Friday was still too wet for burial, they are contemplating whether it will be safer to hold a public celebration of Stuffy’s life in a few months. How long is too long before you do something? Miller asked. Is six months too long? she wondered.

Tributes have been popping up unexpectedly since Stuffy’s passing. Kirby and his wife Bev were out walking and saw a vehicle at the baseball field, not too unusual in this southeastern North Dakota community. Later, Kirby Steffens found someone had left a message in the home-plate dirt, “RIP Stuffy.” The family would like to know who made this tribute to their dad, touched by the heart-felt message.

Others posted Facebook messages talking about how their lives were influenced by Stuffy, such as what was written by Dunnel Abrahamson.

“He was one of the first people we met when we first moved here and he made us feel right at home. We will never forget his kind heart and bright smile,” she wrote.

Then the day before the drive-by visitation, community members Daphne Taylor, Teri Bertelsen-Church and Brenda Adolf freshened the memorial area by placing flags along the sidewalk and flowers.

“My dad always loved the flowers and the flags around the memorial, so they thought they would honor him with that,” Miller said.

HOW DO YOU GRIEVE during a coronavirus pandemic when only small gatherings are held in churches? The family of Delmer “Stuffy” Steffens decided to include their community by hosting a drive-by visitation Wednesday morning.