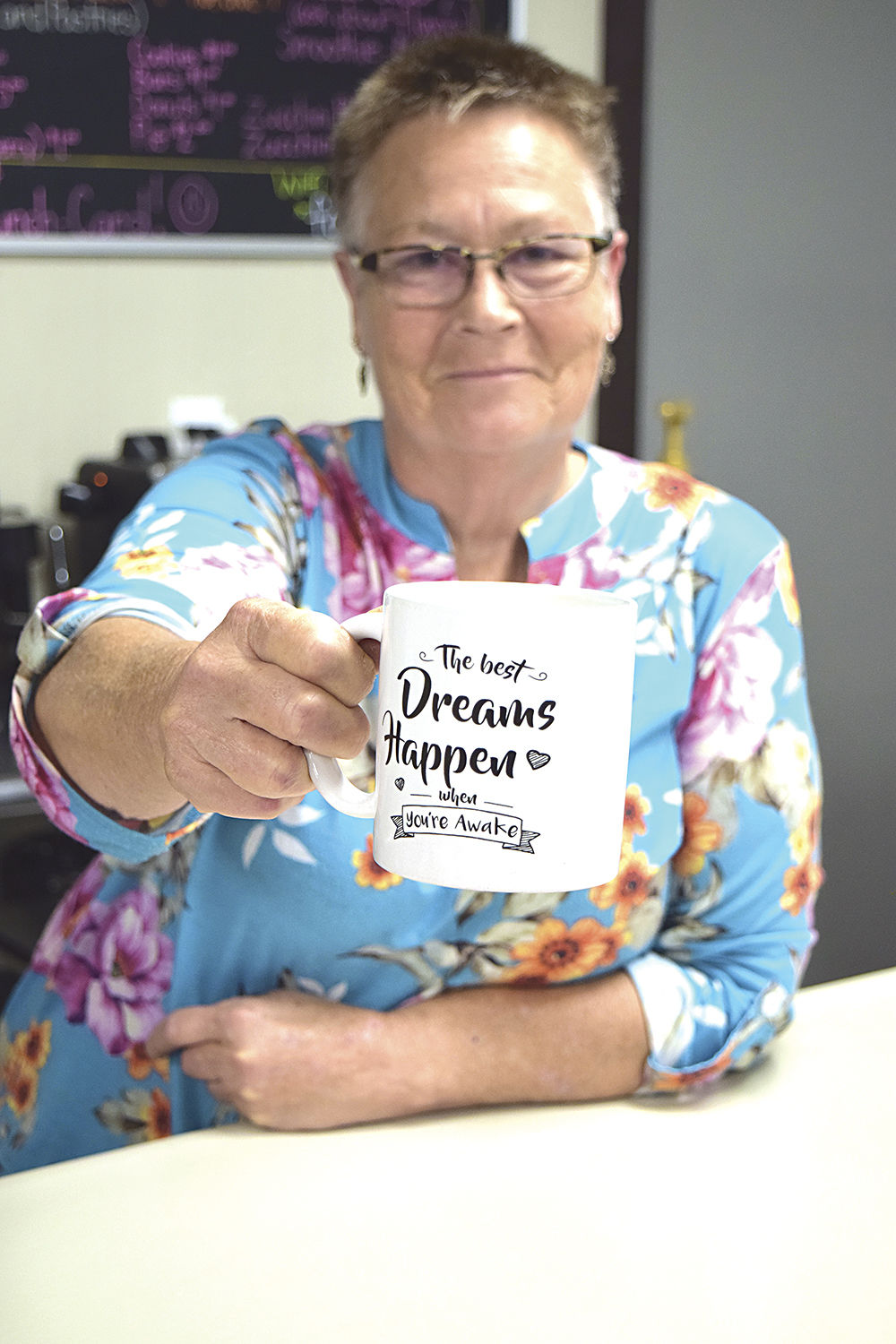 Sally Anderson holds up her coffee cup that says 'The best reams happen when you're awake.' 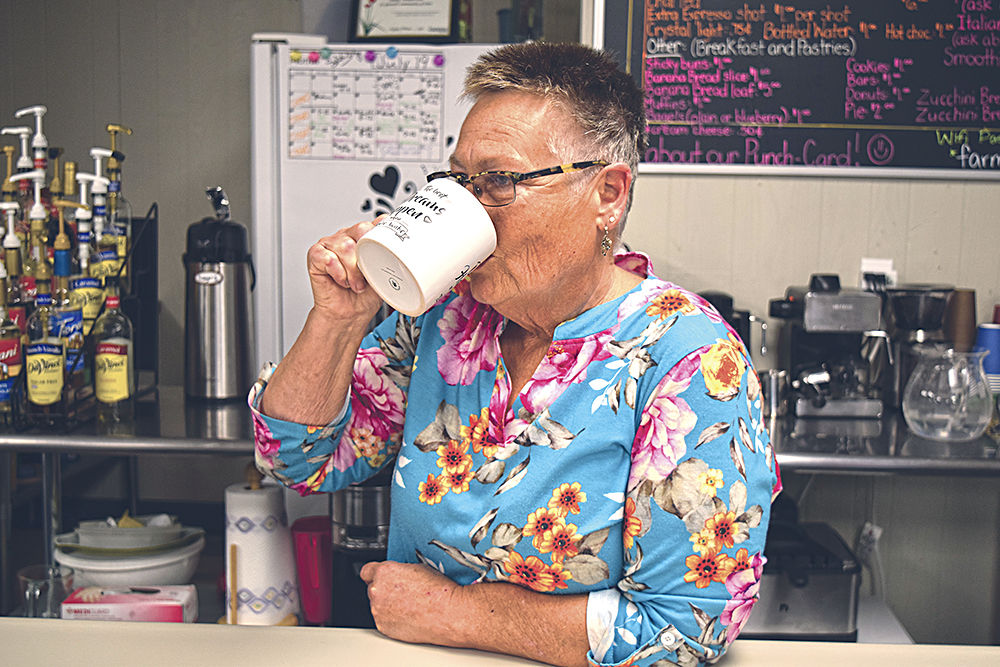 Sally Anderson is the owner/operator of Sal’s Cove, a new coffee shop in Hankinson. Anderson’s first memories of drinking coffee are from when she was a young girl sneaking a cup or two from her parents, she says. 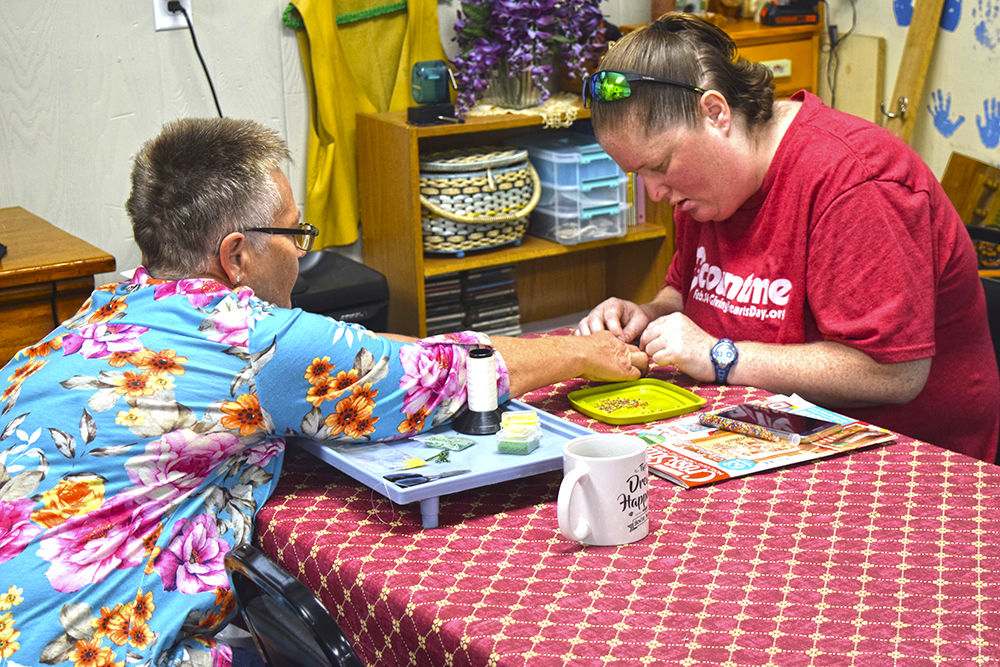 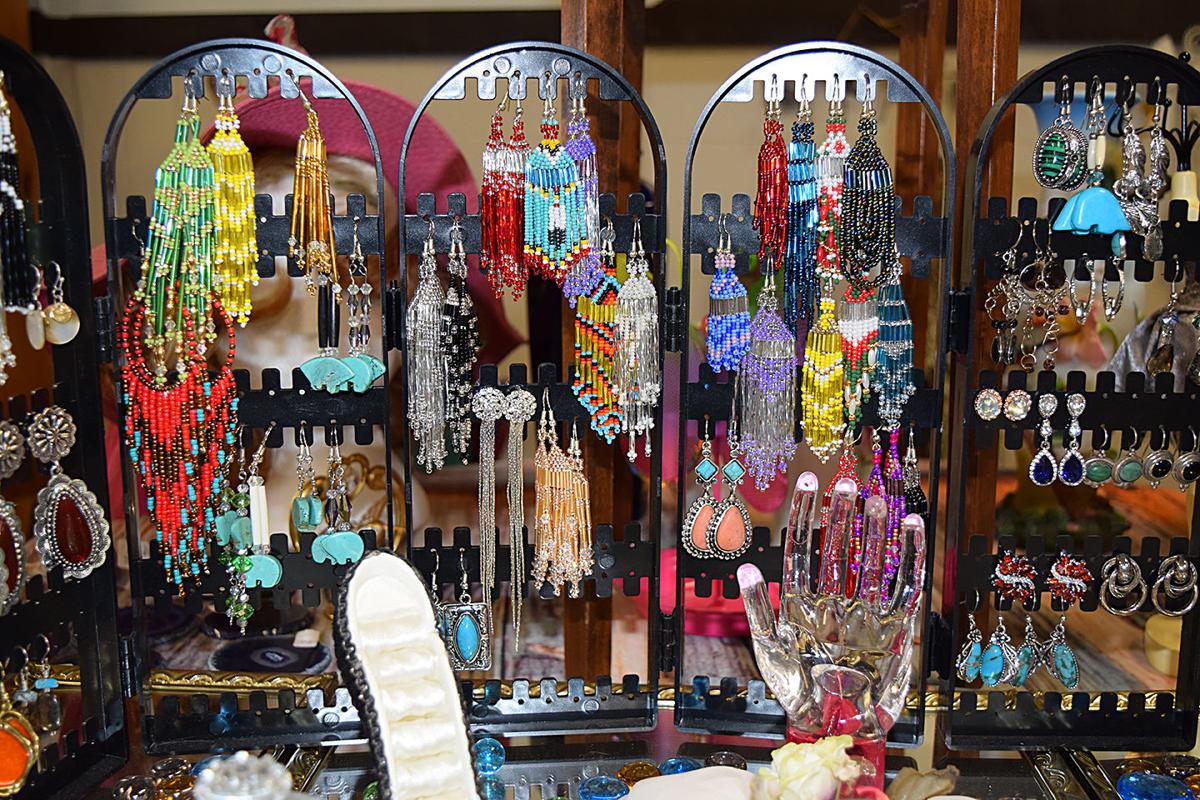 These earrings were made by Sally Anderson and shows different styles of bead work. 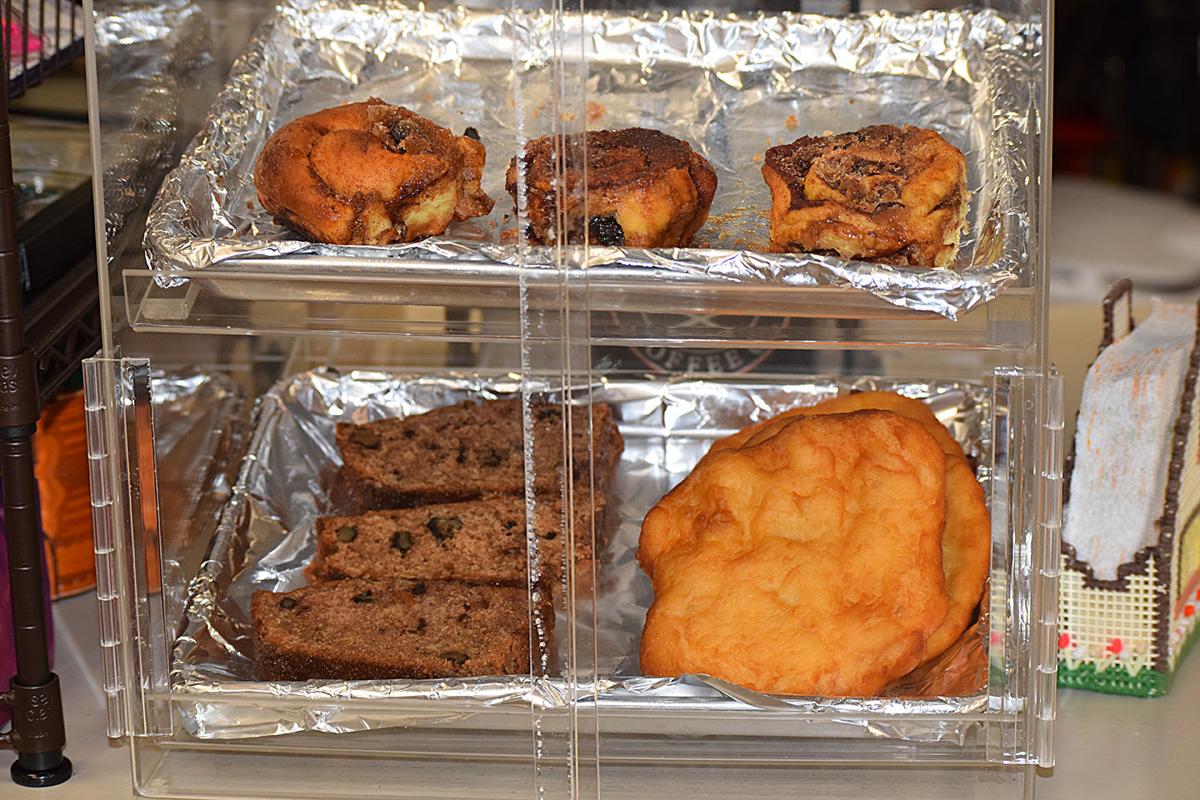 Homemade baked goods are on the menu at Sal's Cove, everything from cinnamon rolls to zucchini bread and fry bread.

Sally Anderson holds up her coffee cup that says 'The best reams happen when you're awake.'

Sally Anderson is the owner/operator of Sal’s Cove, a new coffee shop in Hankinson. Anderson’s first memories of drinking coffee are from when she was a young girl sneaking a cup or two from her parents, she says.

These earrings were made by Sally Anderson and shows different styles of bead work.

Homemade baked goods are on the menu at Sal's Cove, everything from cinnamon rolls to zucchini bread and fry bread.

Taking a coffee break is a matter of business for Sally Anderson at Sal’s Cove.

She has had a love affair with coffee since sneaking this hot brew from her parents as a young girl, she said. Wednesday, Anderson held a mug with a grin, nodding her head at the words found on the front, “The best dreams happen when you’re awake. That’s me,” she said after opening Sal’s Cove about three months ago in the former Weeser Day Care Center at Hankinson.

Always dreaming of opening her own shop, Anderson said she first planned to have a combined tanning center and coffee shop. But this site doesn’t allow for tanning beds because of insurance restrictions, she said. Forced to revamp her dream, she opted to open a coffee shop and teach crafts on the side.

“Crafts are not being passed on during this electronic age,” Anderson said, so she already has offered crochet and bead work classes here.

Anderson learned bead work after being married to a traditional Native American man for 20 years, she said. Self-taught, she is now passing these skills to whoever takes an interest. Students can purchase beads and items from her if they don’t have their own, she said, but her classes are free because this is her way of giving back, she said.

That morning Amber Mason of Hankinson walked into Sal’s Cove with a handful of cross stitch magazines. A daily visitor, she learned how to do bead work from Anderson and made her own bracelet in a week. Wednesday morning Mason continued working on another bead project, incorporating the brick stitch learned from Anderson. Beading is not a fast craft as each bead is sewn individually, Anderson said.

“It’s important for Hankinson to have something like this. There’s not much to do in town. This is a good place to come and visit, to come in and do crafts or just hang out,” Mason said, who is slowly working her way through the Sal’s Cove menu. She likes the protein shakes and smoothies, Mason said.

Entering Sal’s Cove is like walking into someone’s home. Anderson is quick to point out with her distinctive laugh, it should feel homey since many items came directly from her house. Immediately in front is a large work table, where Anderson teaches crafts. She started with two weeks of teaching crochet, while last week’s venture wrapped up a two week course on intricate bead work, a Native American art found on clothing, moccasins and jewelry.

She also loves to collect rocks so has some cut amethyst and agates on a table. A fan of crystals, she set crystals and rocks in necklaces, which also are part of the consignment shop inside Sal’s Cove.

A natural teacher, Anderson said there are lessons to be learned from rocks.

“You should always carry a rock in your pocket because you always want to remember not to be hard and cold like that,” she said, pointing out her rock is carried in her purse so she won’t forget this lesson.

The heart of Sal’s Cove is the coffee shop, found behind the large counter. A handwritten chalk board contains all her offerings — espresso, mocha, latte, cappuccino, smoothies and homemade baked items to name a few. There also is plain coffee in case someone doesn’t like the fancier brews, she said.

Her plan is to have a relaxing space so people can come in and stay awhile. She has free WiFi, a computer, some games and ample seating. She also has some consignment items for sale, including her intricate bead work and jewelry.

While hoping that Sal’s Cove takes off, Anderson’s full-time job is working as the PM licensed practical nurse at St. Gerard’s Community of Care, Hankinson.

Sal’s Cove is open Monday through Saturday from 8 a.m.-12 p.m. Sporadically it is open longer whenever Anderson has a day off from the nursing home. She also stays longer some days when making her homemade baked goods like flat bread and cinnamon rolls.

WHAT IS DIFFERENCE BETWEEN A CAPPUCCINO AND LATTE?

Both a latte and cappuccino are made with espresso — a type of revved up coffee — and milk. The difference is that a latte has more milk in it, Anderson said.

Any coffee drink served hot can also be served cold. When patrons ask for anything blended, that means put it on ice.

SOME INTERESTING FACTS ABOUT ROOM SAL’S COVE OPERATES OUT OF?

The space used to be Weeser’s Daycare, so to maintain the history of the space, Anderson left the handprints of Hankinson’s children that were added to the wall when they were enrolled at the daycare center. Also, the countertop alongside her kitchen area used to be a bright orange. It has now been painted to a more neutral color.