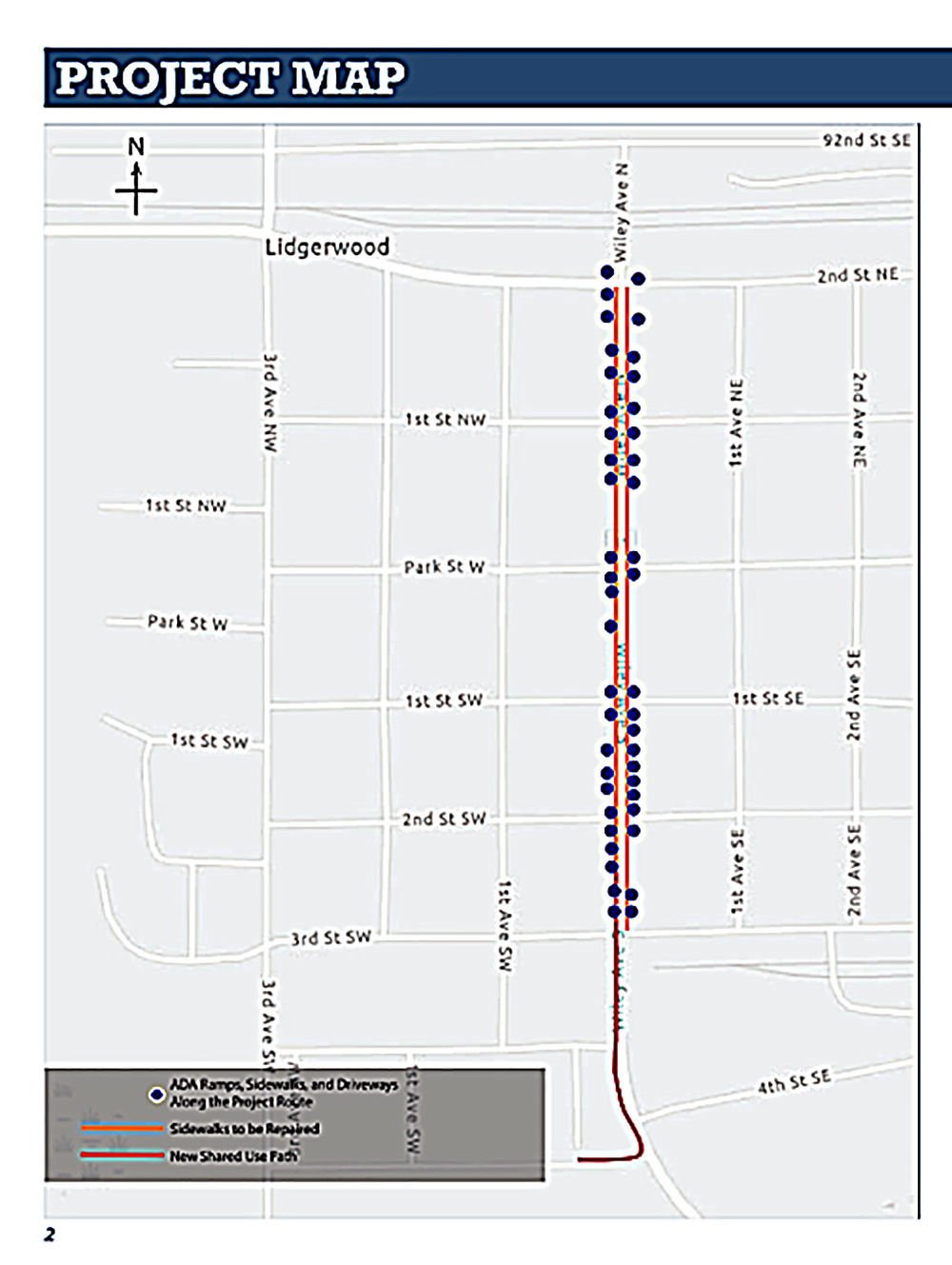 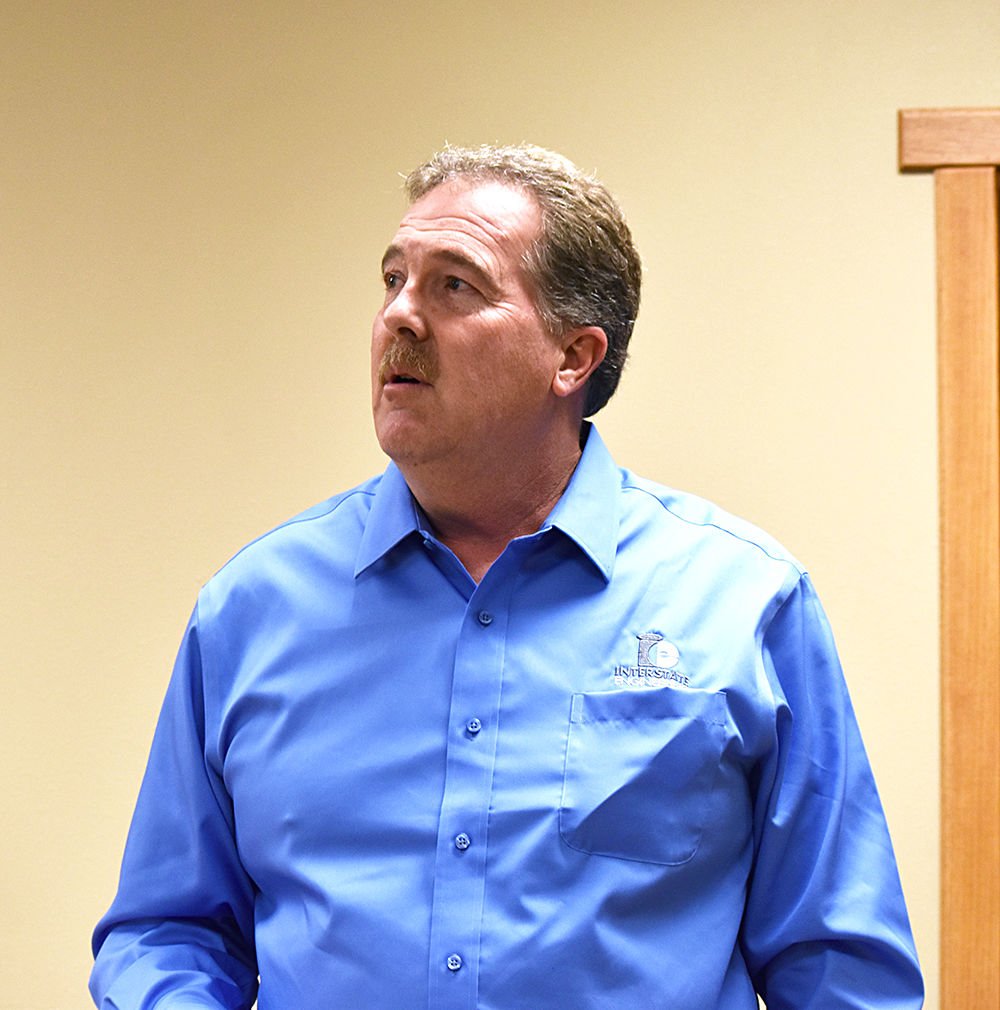 Interstate Engineering, Inc., Chairman Damon DeVillers addresses a small group of Hankinson residents Wednesday evening to talk about the urban grant the city is receiving. Through it, N.D. Highway 11 will be reconstructed through much of Hankinson, along with new lighting and some new sidewalks.

Interstate Engineering, Inc., Chairman Damon DeVillers addresses a small group of Hankinson residents Wednesday evening to talk about the urban grant the city is receiving. Through it, N.D. Highway 11 will be reconstructed through much of Hankinson, along with new lighting and some new sidewalks.

A 2018 traffic survey shows 895 vehicles use this road each day in Hankinson, which breaks down to 665 passenger cars and 230 trucks. Ruts and potholes are the result of all this traffic, making it hard for city workers to keep up, said Hankinson Mayor Loren Hovel.

When the chance came to replace much of this road, the city jumped at a federal grant that pays 80 percent of a project to reconstruct Sixth Street South, which is what Highway 11 turns into at Hankinson. The remaining 20 percent is split with 10 percent being paid by both the city and state. While it could cost more if the city upgrades certain features, Hankinson will pay at least $147,935, which is the state share as well. The remaining federal share is $1.18 million. The project will also install about 11 new light poles and new sidewalks in some areas.

“We have been watching this road deteriorate over the years. Now is the chance to get this area cleaned up and looking good for our community,” Hovel said after the public meeting.

Lidgerwood also took advantage of this federal grant and will use funds to build a new sidewalk on the city’s south edge that links Dakota Estates Retirement Center to an existing sidewalk in front of NAPA, said Damon DeVillers, chairman of Interstate Engineering, the consultant hired by North Dakota Department of Transportation to design the projects at Hankinson and Lidgerwood.

DeVillers headed public meetings at both communities — Tuesday in Lidgerwood and Wednesday in Hankinson to talk about the projects, their costs and how they will affect residents.

Hankinson has been working on this urban grant project for about two years. It will take another year before the construction takes place, which is scheduled for summer 2021. The city already has set aside $100,000 to pay its share of the project, while the remaining funds will be transferred by the end of this year, Hovel said.

This project is much more comprehensive than what is being planned at Lidgerwood. Here, the highway will be removed and replaced by materials that also include a GeoGrid that provides strength to the infrastructure, DeVillers said. Sewer lines, drain tile and inlets to fix drainage issues will be installed and a portion of existing curb and gutter replaced as well, he said. Improvements also will be made to help trucks turn better onto Highway 11, he said.

While bids won’t be let until February 2021, city officials hope bids allow them to upgrade and install decorative light poles. Any expenses above the $1.47 million grant become the city’s responsibility, DeVillers said. Another possible upgrade may include dynamic speed limit signs, which are large electronic signs that post how fast cars are driving. Traffic enters the city driving 45 mph, so it isn’t easy slowing drivers to the 25 mph speed limit, he said.

The project goal is to replace the failing section of road that has become a maintenance issue for city workers. The age of the existing road base and increasing size and frequency of trucks using the highway caused this road failure, DeVillers said during Wednesday’s public meeting.

The entire stretch of road is not going to be shut down during the reconstruction. Working one block at a time, half of the road will be worked on to allow traffic to continue to run to minimize disruptions, he said.

The project is two-fold in Lidgerwood. In addition to building a new sidewalk from Dakota Estates to NAPA, existing sidewalks along Highway 11 also will be updated to ensure they meet the ADA requirements throughout downtown. This will include new ADA ramps.

“There were a lot of people from Dakota Estates who used to walk uptown to the grocery store or downtown. We needed something better than to just have them bused because it’s a safety issue to have people walking on a highway,” said Lidgerwood Mayor Dale Krause.

N.D. Highway 11 and N.D. Highway 18 link briefly at Lidgerwood, so this road draws heavy traffic and does not offer protections for pedestrians or bicyclists, he said.

It is hoped construction will not affect traffic or pedestrians too much, DeVillers said. Businesses like NAPA and Northside Implement may have limited access to their storefronts at some point as the sidewalk is replaced, but the interruption should be brief, DeVillers said. Contractors will work with the public and businesses to alert them when work happens so they have time to put alternative access points in place, he said.

A smaller group attended the Lidgerwood public meeting Tuesday. Some residents were concerned they would be taxed again since the city just completed a major street project that updated water lines as well. This federal grant is not part of that project, Krause said. The city will utilize its 1 percent city sales tax to pay the local share of the project, so taxpayers will not be hit again, he said. Those funds already are in place, Krause said.