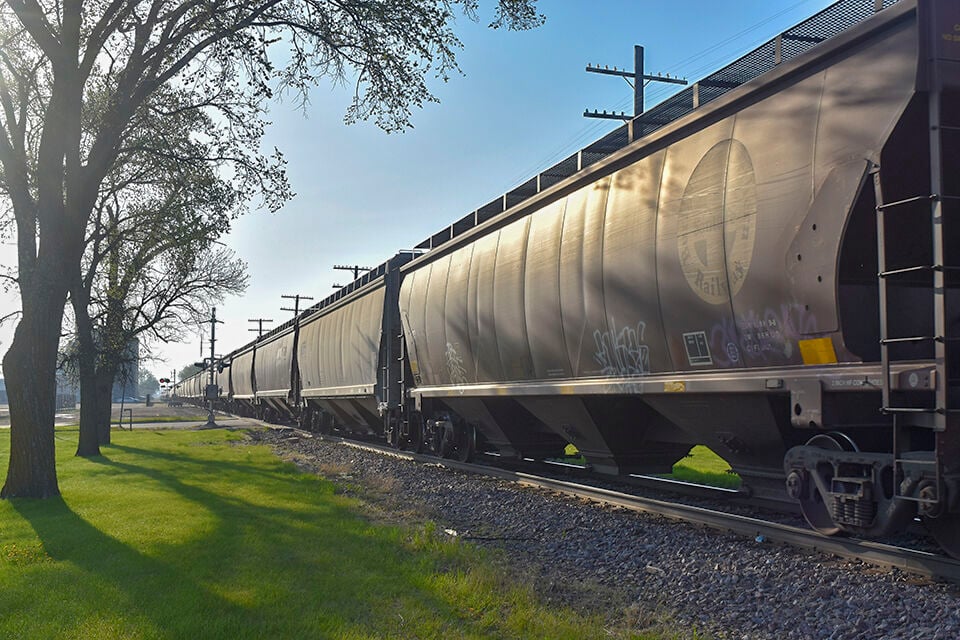 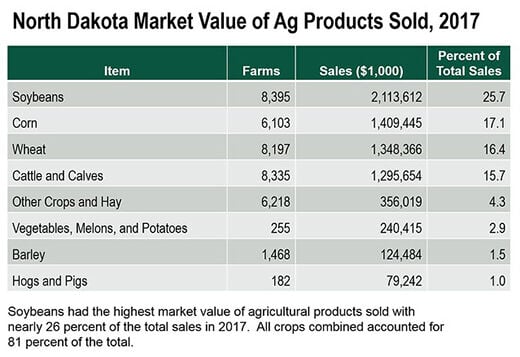 North Dakota’s crop sales as of 2017, the most recent year data is available. Corn and soybeans have surpassed wheat as the states most popular crop.

North Dakota’s crop sales as of 2017, the most recent year data is available. Corn and soybeans have surpassed wheat as the states most popular crop.

Editor’s note: In April-May we are publishing a four-part series on agriculture and the lifecycle of crops. Each Tuesday edition of Daily News and News Monitor will feature a different part of the growing and harvesting process.

April 27: Part 1 Looks at the seed and planting process at the start of the growing season.

May 4: In Part 2 we feature the growing stage of crops grown in our area.

May 11: Part 3 focuses on harvesting crops and the movement from field to elevator.

May 18: Part 4 takes a look at where the crops grown here end up.

Once a seed has been planted, grown and then harvested it often travels internationally, leaving North Dakota for distant lands.

The grain market is an extremely volatile place, prices are unpredictable and can fluctuate at the drop of hat. Any bit of new information, speculation or change in trade policy can influence prices wildly.

“It’s really a promise to either receive or deliver grain in the future. They’re standardized contracts, the specifications are fixed except for the price. Price is the only thing you’re kind of negotiating,” said Frayne Olson, crop economist and marketing specialist at NDSU.

Hundreds of thousands of people are trading contracts worth millions of dollars every day, prices in the futures market are used as a starting point for the cash market, Olson said.

“They use the prices in the futures market as the starting point for what we should offer today in the cash market. That whole concept that there’s these two markets that are working in tandem gets kind of confusing for people,” Olson said.

The grain market today is nearing highs previously reached between 2011-2013.

“We had exceptionally high grain prices and we set brand new records for how high prices came, especially in 2012. And the main reason 2012 was different is because we had some very, very dry weather in the corn belt in Iowa and Illinois which are big corn and soybean producing states,” Olson said.

Today prices are rising on corn and soybeans for a number of reasons. One factor that plays a significant role is the easing of trade war tensions between China and the U.S.

In 2017, China raised tariffs on U.S soybean imports. Soybean imports are already taxed roughly 8 percent in China. New tariffs added a 33 percent tax on top of that for U.S. soybeans causing prices to bottom out in the U.S.

Although the trade war is still ongoing, Olson said, the removal of that tariff has caused an explosion in demand for U.S. soybeans and grains causing prices to rise.

“There are about 400 million people in China that have a middle-class earning. The entire population of the U.S. is about 330 million ... My point is, the middle class in China is bigger than the entire U.S. population and they have food buying habits, what they buy is different, the type of things that they like is different, but they have the ability to pay for what they want for food,” Olson said.

The needs of China and its newly realized thriving middle class play a significant role in not only grain market prices, but where U.S. grown grain ends up and how it’s utilized.

As trade war tensions have eased, demand from China has exploded in a way that Olson and others had not predicted.

North Dakota numbers are more difficult to track, Olson said, due to how grain is stored and that grain from other states could be stored and sold in North Dakota and vice versa.

Fifty percent of soybeans grown in the U.S. stay in the U.S. and are crushed into soybean meal and soybean oil, Olson said.

Soybean meal is used for animal feed, while soybean oil is used for cooking oil, salad dressing, biodiesel and endless other uses.

The other half enters the export market. China is the largest importer of soybeans. Of the 50 percent of soybeans exported in the U.S., roughly 60 percent of it goes to China.

For soybeans grown in North Dakota, approximately 70 percent of soybeans are shipped to the Pacific Northwest.

“About 70 percent is exported and almost all of that goes directly to China. About 30 percent stays in the U.S. There’s probably only a small five to 10 percent that’s actually used within the state,” Olson said.

The most convenient method for sending soybeans and other grains to the Northwest and other parts of the country is trains, Schuler said.

“You’re able to move large quantities at a cheaper cost,” he said.

There are six different types of wheat grown in the U.S., Olson spoke about wheat and its uses broadly.

Approximately 40-45 percent of wheat grown in the U.S. is exported.

Between 40-45 remains domestic to be made into flour, Olson said.

The remaining 5-10 percent is used for feed. This wheat tends to be lower quality, Olson said.

Twenty-five to 30 percent of wheat grown in North Dakota stays within the region, the remaining 70-75 percent is then shipped elsewhere, approximately 40 percent of that is exported internationally.

Both corn and soybeans are primarily feed crops, while wheat is a food crop.

Thus, global demand for wheat changes with the population, while soybeans and corn demand grows with economic growth.

This had led to a change in North Dakota growing habits, where the state used to primarily grow wheat. Wheat has now been surpassed by soybeans and corn, Olson said.

Changes in what is grown will have far reaching effects for the grain market in North Dakota and globally.