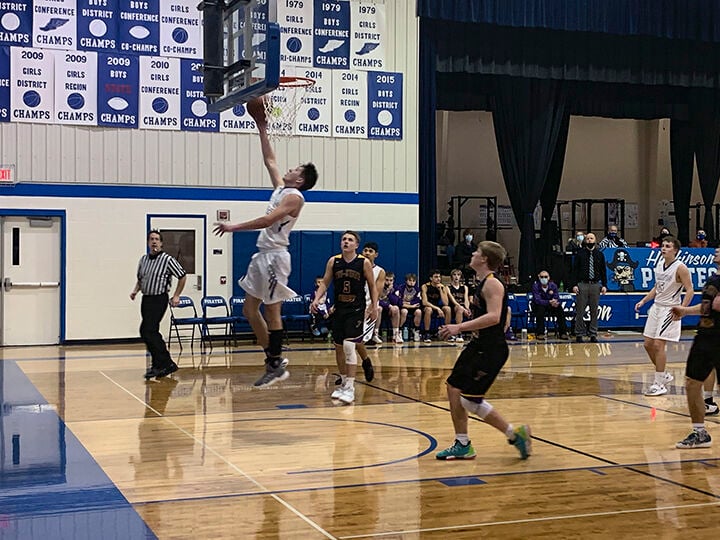 Hankinson's Austin Bladow, No. 33, taking a layup after rushing down the court. 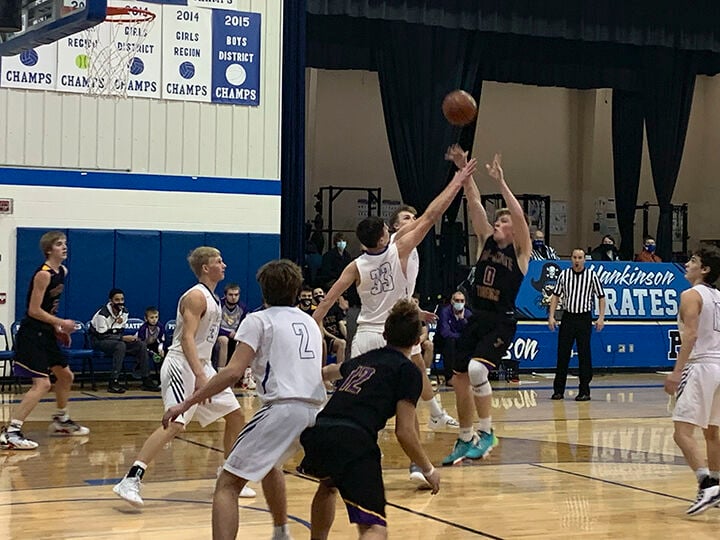 Tri-State's Derick Carl, No. 0, takes a shot as Hankinson defenders close in on him.

Hankinson's Austin Bladow, No. 33, taking a layup after rushing down the court.

Tri-State's Derick Carl, No. 0, takes a shot as Hankinson defenders close in on him.

The win was the Pirates’ first this season.

“For a first win, it felt great to be able to extend a lead,” Pirates Head Coach Mike Gaukler said.

The Tigers were able to take a 5 point lead over the Pirates in the first quarter, finishing it 16-11.

“Right away we put a little pressure on them and we ran the floor, got the ball moving in transition,” Tigers Head Coach Adam Krueger said.

The Pirates started out slow, but the momentum had shifted in their favor by the end of the second quarter. The Pirates were able to fight back, putting up 29 points and gaining a solid 12 point lead over the Tigers.

The Tigers, for their part, put up 12 points in the second quarter. Ending the quarter 40-28.

The Pirates were able to further stretch their lead by putting up 23 points in the third quarter. The Tigers were held to six points for an overall score of 63-34.

“We were able to get into transition and finish which is something we've had difficulty doing the first few games. Defensively we kept them in check. They were not hitting shots so that always helps,” Gaukler said.

The Pirates' top scorers were Cruz Hernandez with 20 points, and Kaden Kelley and Austin Bladow with 15 points.

The Tigers' top scorers were Derick Carl and Lewis Ceroll with 12 points and Brandon Gruenwald with 11 points.

Between quarantines and snow storms resulting in canceled practices, Krueger said it’s been a slow start to the season, but he loves the effort he’s seeing from the team.

“I just love the guys' effort, I never have to worry about them trying their hardest and working hard no matter what the situation is,” Krueger said.

Next the Tigers will play Waubay-Summit at Rosholt High School on Friday, Jan. 15.

“I’m excited because they’re another good South Dakota team … I’m really excited to see what these guys got. I kind of gave them an option; it was either to be satisfied with how the last four games (went) or respond. The response is going to determine how the rest of the season goes and they were definitely up for the challenge,” Krueger said.

The Tigers are currently 0-6 this season.

“Tiospa Zina is a class A team in South Dakota.  They are very athletic with a spectacular point guard. Any game at this point helps. Win or lose, we hope to gain from the experience,” Gaukler said.

The Pirates are currently 1-4 this season.