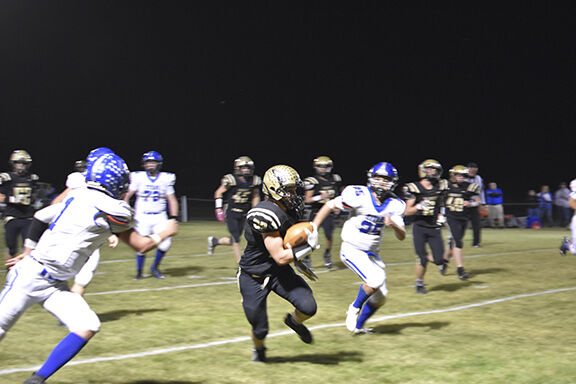 The Warbirds did a good job of getting yards and keeping drives going Friday night against the Titans. 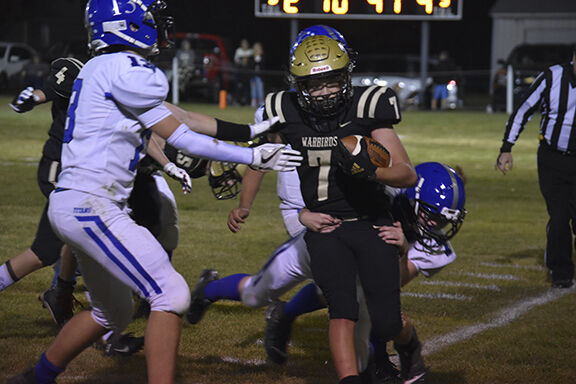 Tyler Brandt, no. 7, shakes off a tackle.

The Warbirds did a good job of getting yards and keeping drives going Friday night against the Titans.

Tyler Brandt, no. 7, shakes off a tackle.

The Wyndmere-Lidgerwood Warbirds defeated Griggs County Central Titans 62-30 at their homecoming game Friday, Oct. 9. The Warbirds are 6-2 this season and third in their conference.

“We had good balance. We threw the ball a lot better today, we did a nice job putting up a lot of yards and keeping drives going. Converting when we made some poor plays or got penalties, we still converted some key third downs and we kept scoring, that was crucial,” Coach Scott Strenge said about what worked for the Warbirds.

Quarterback Preston Bohnenstingl scored the Warbirds’ first touchdown on a 28-yard run with 9:40 remaining in the first quarter.

Bohnenstingl scored again with 6:20 remaining in the first quarter giving the Warbirds a 12-point lead over the Titans.

The Titans retaliated, gaining their first touchdown with 4:10 remaining in the first quarter.

By the end of the first half the Warbirds lead the Titans 48-14.

The Warbirds put up an additional 14 points in the second half, while the Titan’s put up a total of 16 points.

Bohnenstingl led the game in both passing and rushing yards, with a total of 166 passing yards for three touchdowns and 10 carries for a total of 144 yards and four touchdowns.

The Warbirds completed 10 of their 12 passes.

Defensive back Jake Kuchera led the team in tackles with a total of 10.

The Warbirds committed six penalties over the course of the night for a total of 55 yards.

“Penalties, we got way too many penalties,” Strenge elaborated about what didn’t go as planned Friday night.

The Warbirds play the Hankinson Pirates in Wyndmere at 7 p.m. on Friday, Oct. 16.

“Hopefully, we’re healthy and we can get ready for Hankinson. That’s always a big game for us,” Strenge said.