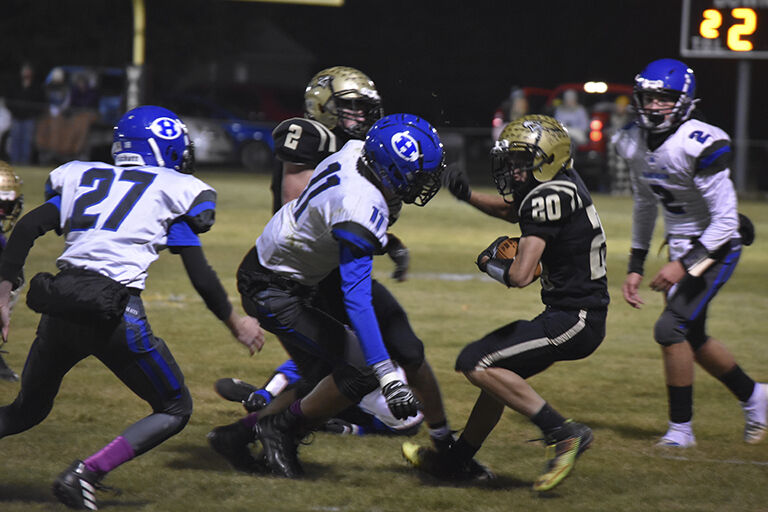 The Warbirds first team scored on every possession except one Friday night. Jake Kuchera, No. 20, pushing through the Pirates’ defense. 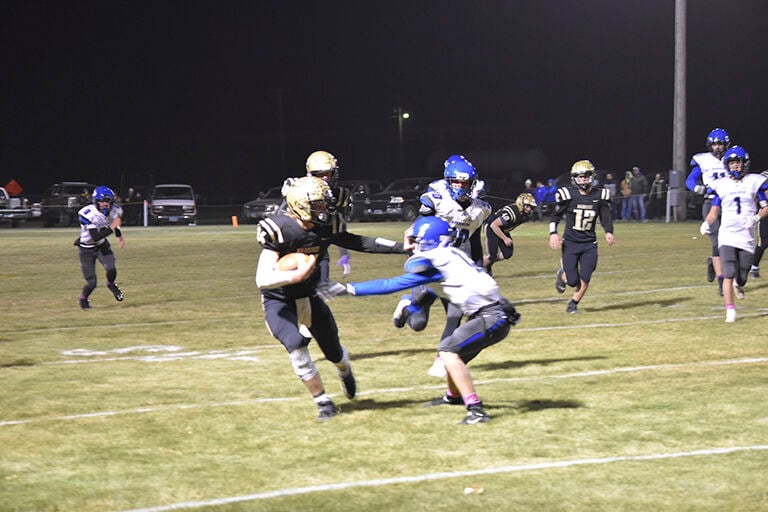 Preston Bohnenstingl, No. 24, wards off a tackle.

The Warbirds first team scored on every possession except one Friday night. Jake Kuchera, No. 20, pushing through the Pirates’ defense.

Preston Bohnenstingl, No. 24, wards off a tackle.

On Friday Oct. 16, the Wyndmere-Lidgerwood Warbirds put on a show for their fans as they took down the Hankinson Pirates 50-6.

For both teams it was their final regular season showing.

The first quarter started off contentious. The Pirates woke up the Warbirds at the start of the game as tight end Austin Badlow scored the Pirates’ first touchdown, bringing the Pirates up to six with the Warbirds scoreless.

The Warbirds scored 50 unanswered points the rest of the way. Warbirds running back Andrew Arth scored back-to-back touchdowns, bringing the score to 14-6 at the end of the quarter.

The Warbirds were up 34-6 at halftime. The Pirates didn’t score again after the first quarter and neither teams were able to add to the scoreboard in the fourth quarter.

“The kids, like they have all season, played the game as a team,” Pirates Head Coach Jason Monilaws said. “They fought hard and didn’t stop playing. We struggled offensively and defensively. You have to give credit to Wyndmere-Lidgerwood for that, they are a good team. We did at times give them some fits more on the offensive side than probably the defensive side.”

“Our first team scored on every possession but one. We dominated the line of scrimmage. Our physicality was evident throughout the game,” Warbirds Head Coach Scott Strenge said.

The Warbirds’ Jonathan Gutzmer led in receptions with one for 26 yards and one touchdown.

The Pirates ended their regular season 1-5.

“I admire this group of guys; they understand that the cards are stacked against them. They were undersized in most games and that didn’t faze them on their approach to the games, they just wanted to play football. The boys have a tight bond and fully understand what it means to be a teammate. They play for each other and trust each other. It has been a pleasure to coach this group,” Monilaws said.

“We are by far the most improved team in the state.” Strenge said. “The kids enjoy every practice and sell out in the game. We hope we can continue the momentum against North Border.”

The Warbirds will play at North Border in the first round of the 9-man state playoffs Saturday, Oct. 24.