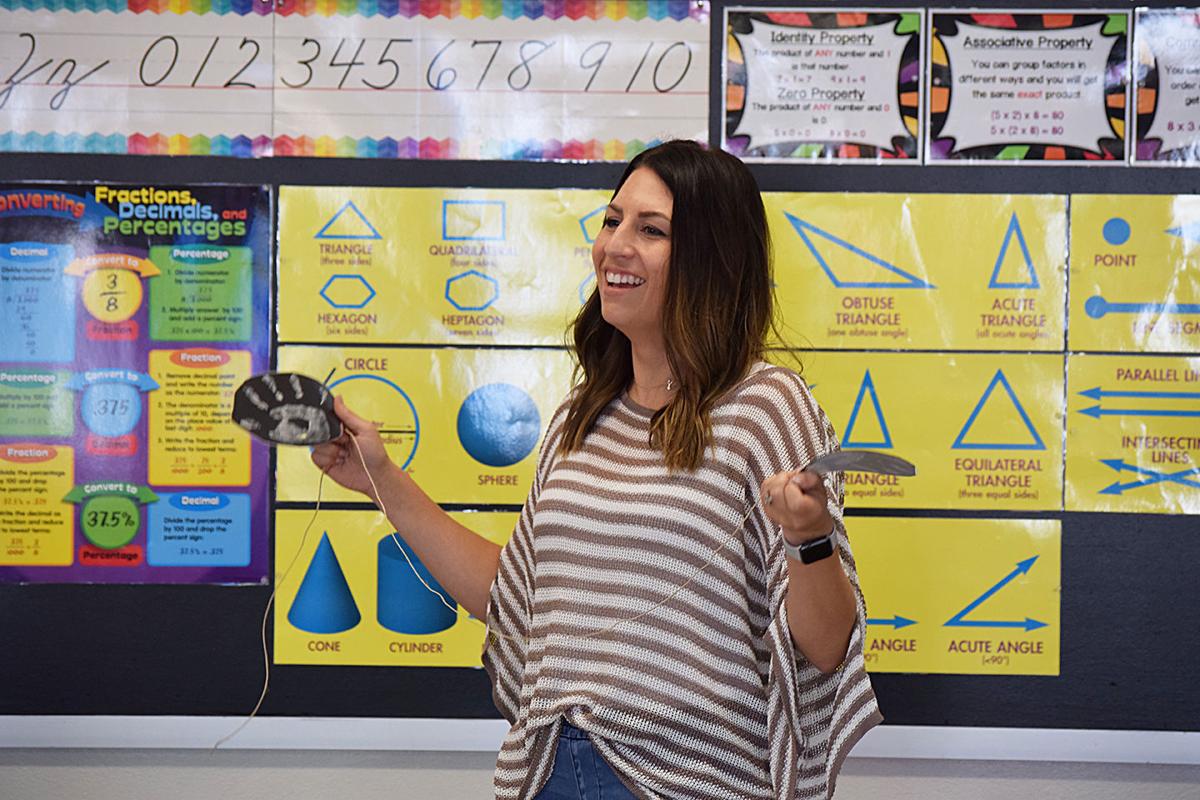 Julia Hoffert is a fifth grade teacher at Wyndmere Public School. She is participating in a Teacher Leadership Academy to obtain her master’s degree. 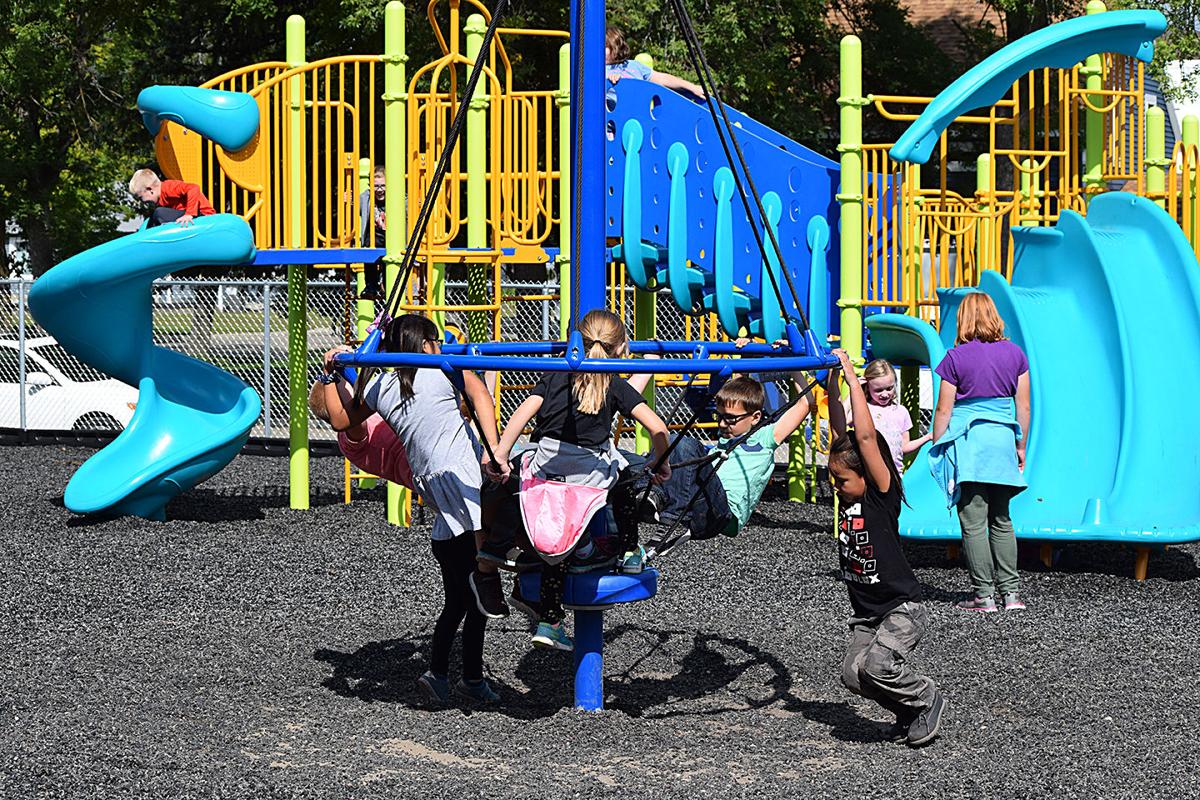 Hankinson Public School welcomed children to the school year with new playground equipment. Superintendent Chad Benson spent part of the day outside to see how children reacted to the new playground. ‘The kids out there, they were having as much fun as you can imagine,’ he says.

Julia Hoffert is a fifth grade teacher at Wyndmere Public School. She is participating in a Teacher Leadership Academy to obtain her master’s degree.

Hankinson Public School welcomed children to the school year with new playground equipment. Superintendent Chad Benson spent part of the day outside to see how children reacted to the new playground. ‘The kids out there, they were having as much fun as you can imagine,’ he says.

Editor’s Note: In this month’s Point of View, we look at what is new down the hallways this school year.

Wyndmere is part of a new educational program that provides leadership opportunities while helping participants earn their master’s degrees in education.

“You can see the dynamic changing when teachers go to get their master’s degree. Their outlook changes,” Dalchow said.

The curriculum includes both in- and outside-classroom work to improve their school. At Wyndmere, the eight academy participants lead inservices held every two weeks on Wednesdays.

Fyre started working toward her master’s degree in 2007, but after having children it became too much to travel to the University of North Dakota and continue working. The academy allows her to obtain her master’s closer to home. Also, with the Doug Burgum Foundation paying for half the tuition, that makes this degree affordable, Fyre said.

“Not all students learn the same and they are all gifted in different areas. My dream is that each student who comes into my classroom will know that Mrs. Fyre will find a way for them to learn,” she said.

Hoffert is already seeing a difference in her teaching. Before coming to Wyndmere Public School five years ago, she didn’t know the other teachers here, she said. Being the only fifth grade teacher, she also didn’t have any peers to bounce ideas off, she said.

“I was my own little island,” Hoffert said.

Because Wyndmere is a cohort with Milnor and Richland through the Teacher Leadership Academy, Hoffert can talk to other fifth grade teachers and then bring in new ideas back her classroom, she said.

Wyndmere worked on the Teacher Leadership Academy a few years before it started rolling, Dalchow said. It is a two-year program. Participants today are in their last semester and will graduate in December, he said.

The academy coming to Wyndmere, Richland and Milnor is the first time it has been offered in a rural setting, Dalchow said. The program initially asks for 20 participants among teaching staff. However, trying to find that many teachers in a district like Wyndmere’s is impossible, he said.

The major program goals are to deliver a credentialed program to North Dakota residents, increase the effectiveness of pre-kindergarten through 12th grade teacher leadership and increase student performance.

What is new at Hankinson?

Superintendent Chad Benson has been trying to obtain a new playground since first arriving here 13 years ago. The old playground was more of an after-thought after the new elementary school was built, he said.

“Nobody thought about it until they were sitting there, staring at a school building without a playground,” Benson said.

The playground was piece-mealed together with equipment added through the years without thought to cohesiveness or practicality, he said. A chip sealing company was in town and had extra pea rock, so asked the school district if they had need of it. “We said, yeah, of course,” Benson said, so pea rock was added to the playground, which subsequently leeches onto the street whenever there is a heavy rain because the playground was not set up to hold pea rock.

School board members exhausted every possibility of how best to utilize the old playground before the decision was made to just create a new space, Benson said.

Being a conservative city, it has taken about 10 years of planning before building this large playground, which is being paid from the district’s building fund. It was planned to spend between $100,000 and $150,000, he said.

A few years ago the district added a small parking lot on the south side of the school, which is the only reason the new playground was built, Benson said because it does take away some of the adjacent parking lot.

There is new equipment, grass and a basketball court that is used daily by Hankinson school children. The old playground will be in place for now, Benson said. It is handy for the pre-kindergarten and kindergarten students to use this space each school day.

Although a formal decision has not been made, Benson said part of this old playground may be turned into more parking.

“The playground was a long process. When you push so long for something there were times we didn’t know if we would get anything decent. I was out there that first day of school to see if the new equipment was being played on. The kids out there, they were having as much fun as you can imagine,” Benson said.

As the 2019-20 school year is still as fresh as the new backpacks purchased to start the year, let’s cruise the hallways of area districts to see what is new at Fairmount, Hankinson, Lidgerwood and Wyndmere.

The curriculum includes both in- and outside-classroom work to improve their school. At Wyndmere, the eight academy participants lead inservices held every two weeks on Wednesdays.