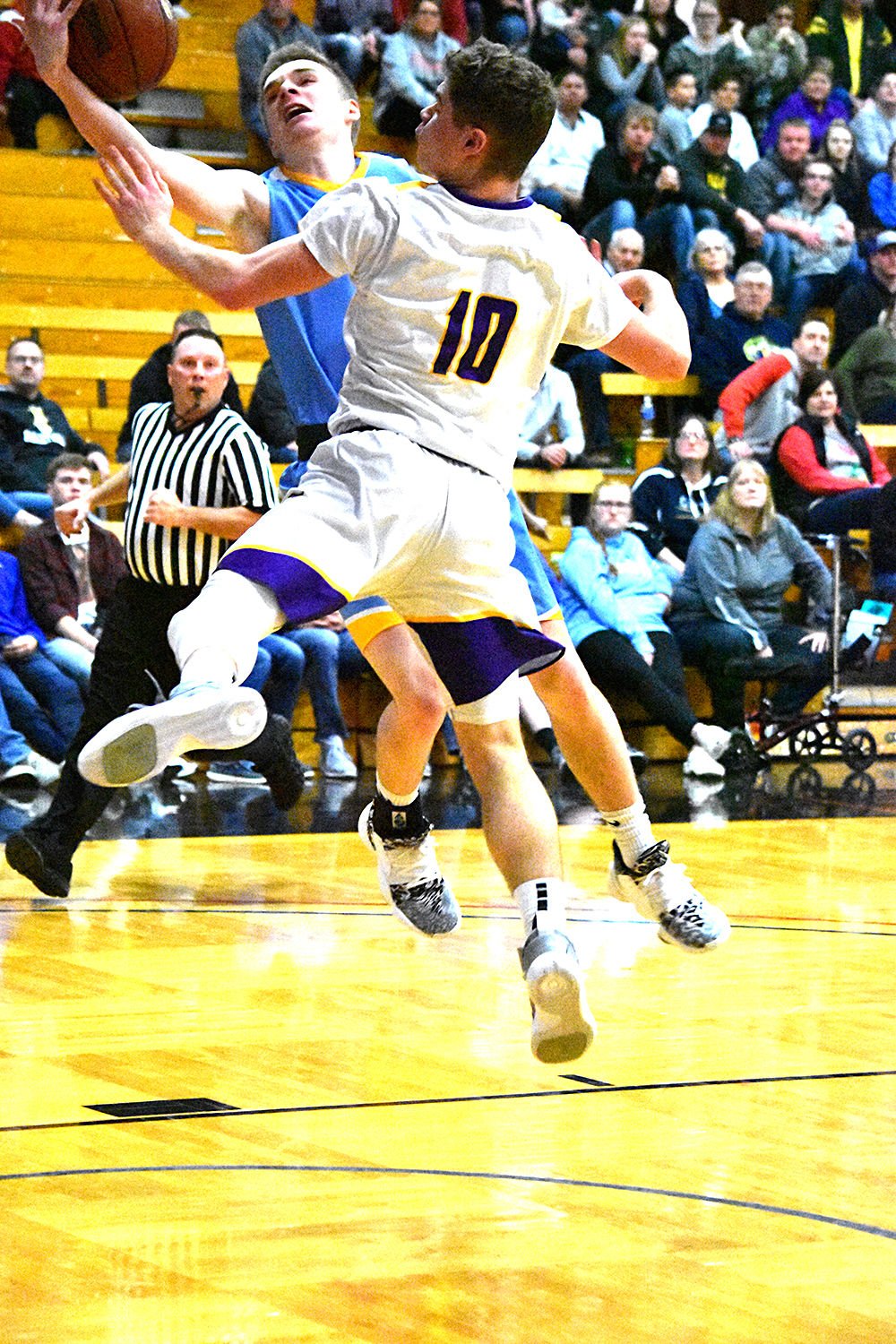 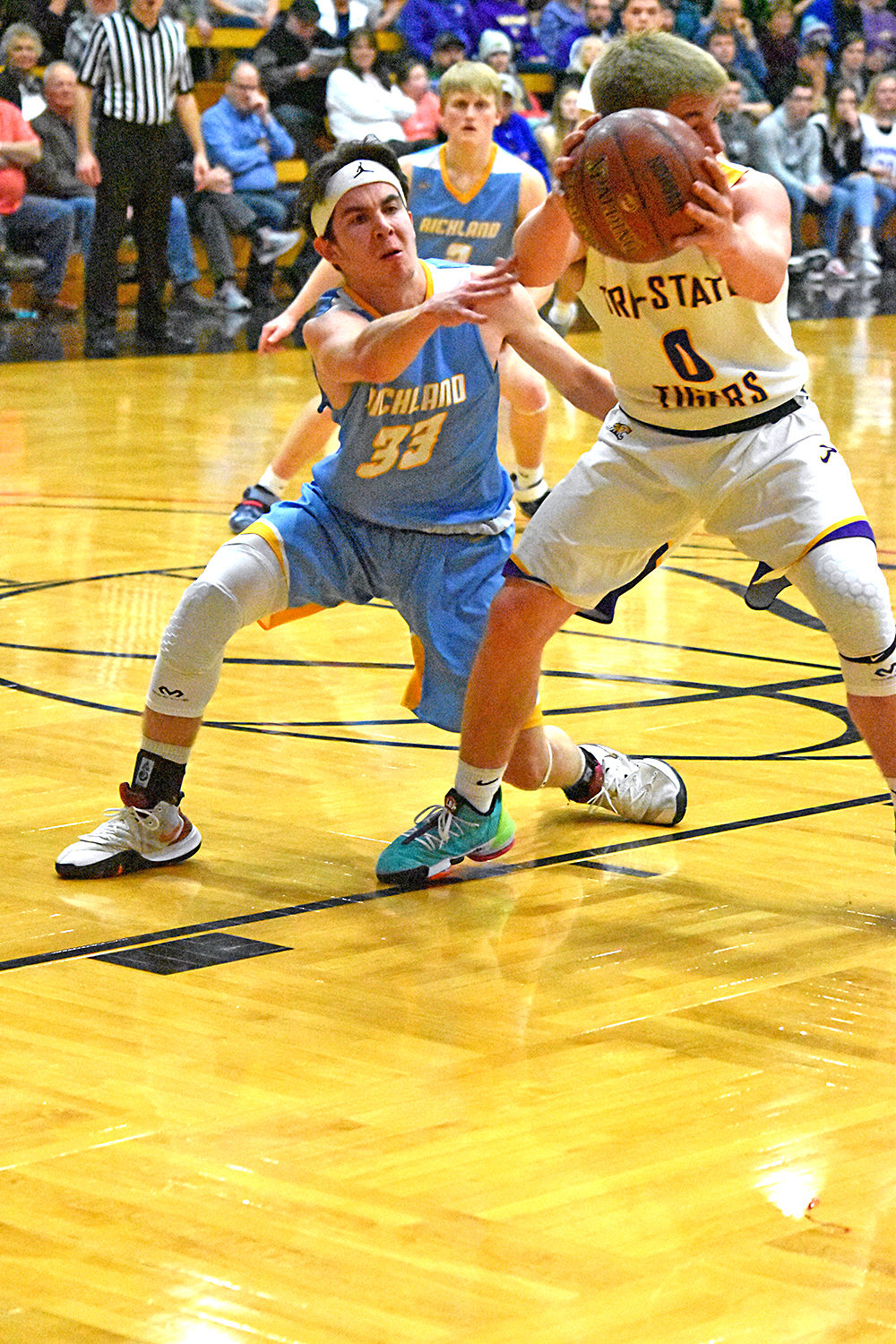 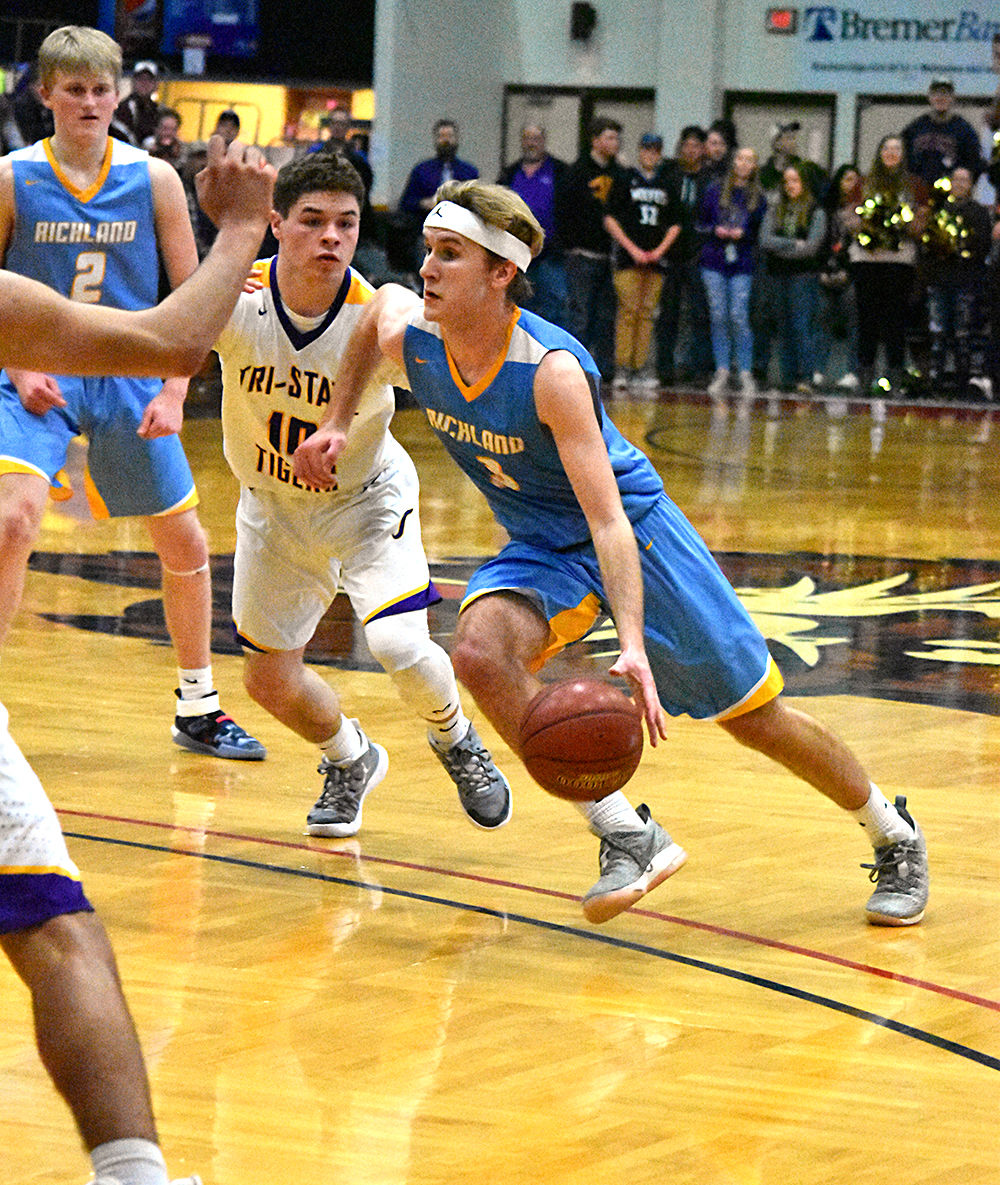 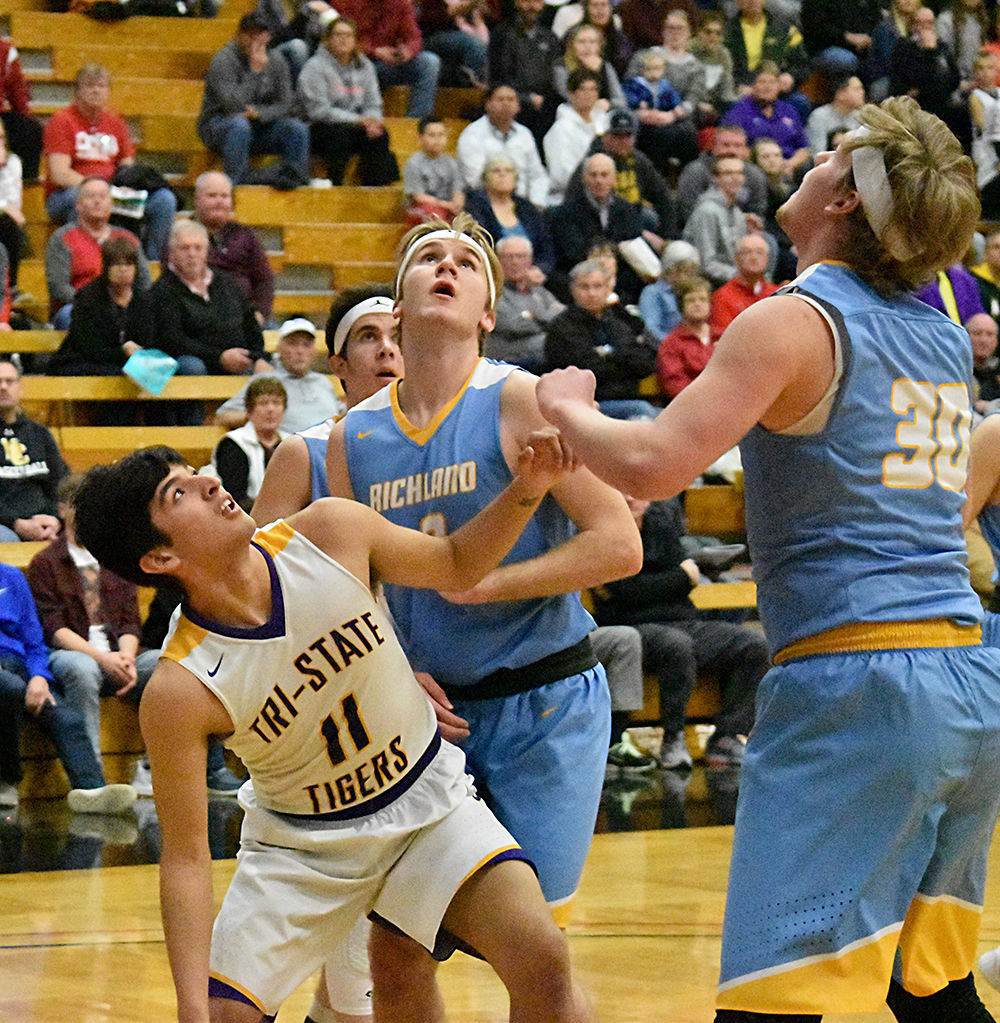 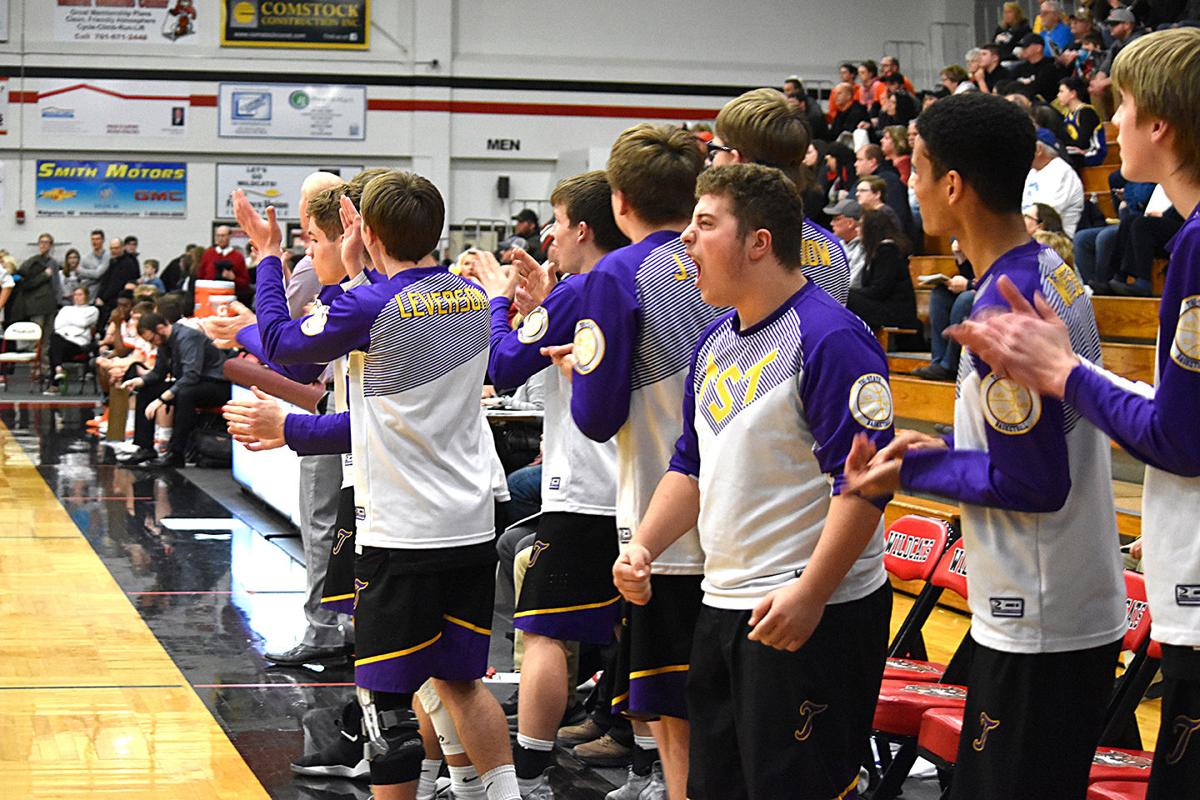 Tri-State senior Zach Schmidt yells his support from the bench in Monday’s quarterfinal game against Enderlin.

Tri-State senior Zach Schmidt yells his support from the bench in Monday’s quarterfinal game against Enderlin.

No. 1 seed Kindred was knocked off its pedestal during Tuesday’s semifinals, thanks to Central Cass.

Tri-State boys entered the regional tournament with a chip on their shoulders. Seniors Jared Tangen and Robert Mendoza said they well remember how Enderlin ended their season last year during the regional play-ins with the Eagles winning 84-67.

Monday night the Tigers were unstoppable and played one of their best games of the season, said coach Adam Krueger. A strong defensive stance and their perimeter shooting allowed the Tigers to extend runs, while limiting whatever offense the Eagles managed to scrape together. The Tigers topped Enderlin 81-78.

It was fun to coach that game, Krueger said, with his team dialed into their “All In” mentality this season — one common goal from a group ready to do whatever it takes to reach that goal.

“The energy and focus was extremely high and everyone was locked in to each other for those 32 minutes. The atmosphere was amazing and truly what the Region 1 tournament is all about. I will never forget that game and it will go down as one of my favorite moments as a coach, but even more happy for our guys to pull it off and be able to experience a game like that. It shows what hard work, determination and never giving up can do for you,” Krueger said.

Monday’s win sent the Tigers into a semifinal game with Richland. Tri-State made the Colts nervous for three quarters with their extended runs that kept the score nip and tuck the first 24 minutes. The Colts, however, took off in the fourth quarter with runs Tri-State was unable to match. Richland went ahead to win 82-59.

Krueger said it was a matter of Richland’s offense turning hot, while the Colt’s defense handled the Tiger’s pressure.

“They are a very good, talented team. They forced some costly turnovers and took advantage of that. They also controlled the tempo and never allowed us to get out and get going,” he said.

Richland has outstanding guard play that it is hard to make uncomfortable, he said. Their bench players hit some shots, allowing the Colts to stay fresh and not miss a beat when they went to their bench. “We went cold on shooting and never could speed up the game any more,” he said.

Thursday, the Tigers managed to put the squeeze on Kindred through the first half, and even led part of the way in their season finale. However, the Vikings charged back in the second half to win 78-62.

Then the Colts topped Central Cass 67-53 in the Region 1 championship game. They would have earned a berth at state until the State B was cancelled.

“It’s a great accomplishment,” said Richland Coach Cody Reiland, who has two players — Carter Lingen and Cole Myers — who have scored more than 1,000 points in their high school careers, while Gavin Reiland is in the mid-900s. “You know they can score,” Reiland said.