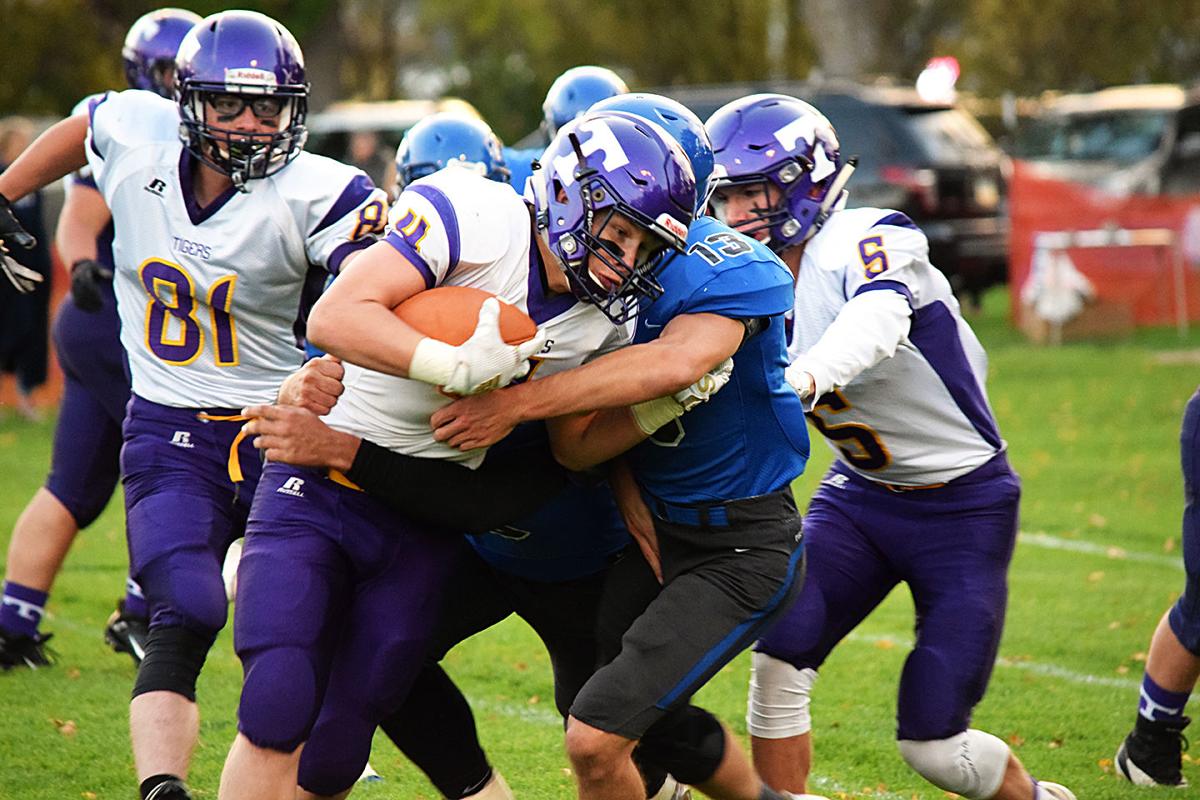 Tri-State senior running back Sam Viger tries to slip past Hankinson’s Skylar Keller Friday night. The Tigers went through the air and on the ground to almost shut out the Pirates 38-8 during Hankinson’s homecoming game. In other area Class B 9-man football games, Wyndmere-Lidgerwood fell to Enderlin-Maple Valley 22-0. 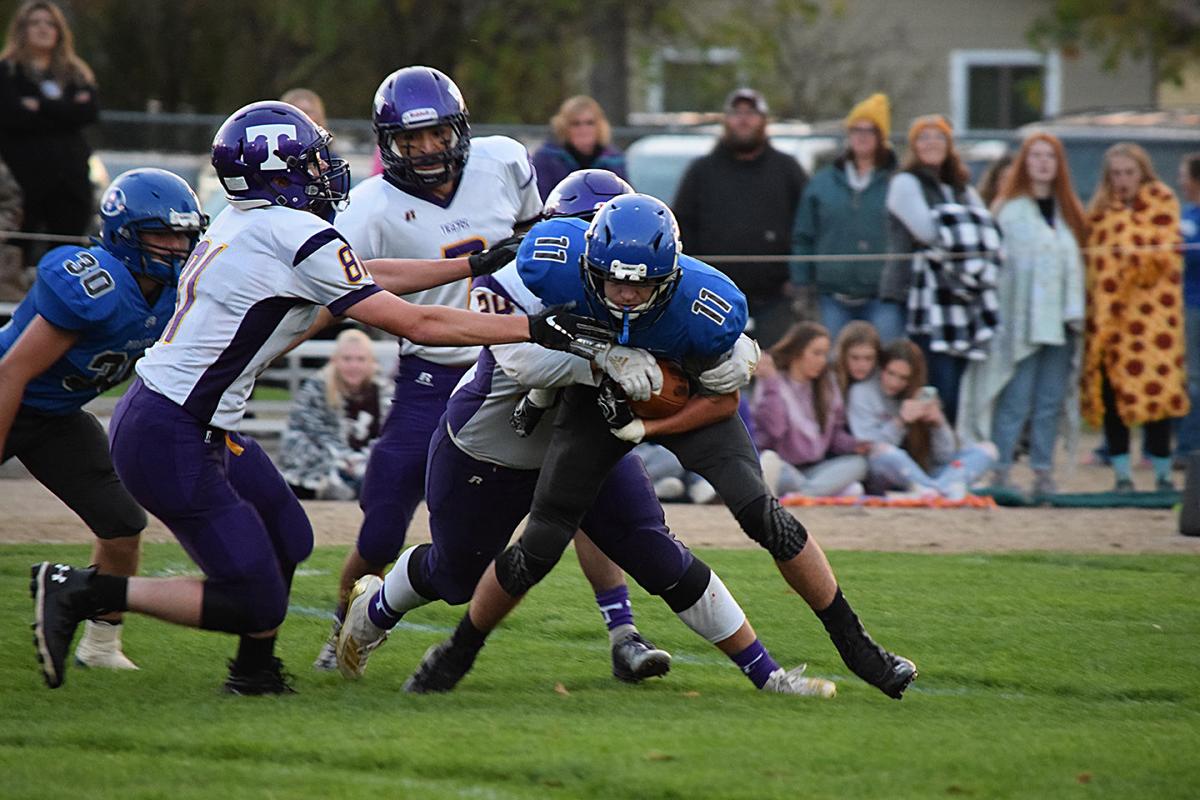 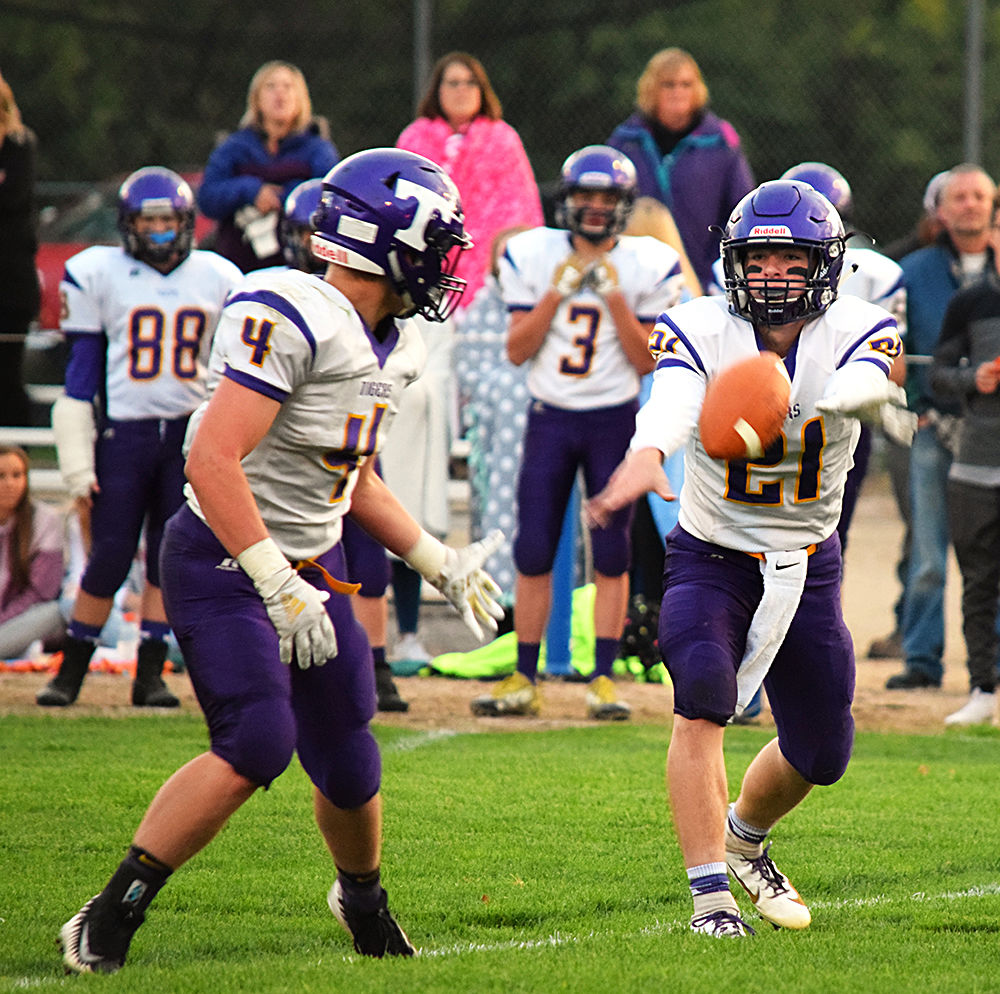 Tri-State senior running back Sam Viger tries to slip past Hankinson’s Skylar Keller Friday night. The Tigers went through the air and on the ground to almost shut out the Pirates 38-8 during Hankinson’s homecoming game. In other area Class B 9-man football games, Wyndmere-Lidgerwood fell to Enderlin-Maple Valley 22-0.

Junior quarterback Derick Carl said the thorn in the Tiger’s side the past few outings has been defending the inside run, which is trademark Pirate football. Friday night the Tiger linebackers stepped up to fill in any holes, limiting Hankinson’s running game, Carl said.

On offense, the Tigers started strong and went 58 yards in five plays to score the first touchdown. After that, it was a matter of being disciplined and controlling all aspects of the game, said Tiger coach Fernando Reese, who watched his team score six touchdowns against a talented Pirate defense.

Despite scoring that many touchdowns, Carl still wasn’t happy with the offense. “I think we could have played better in the second half. We didn’t stick on the gas,” he said.

Tri-State’s physicality was a factor for Hankinson, said coach Jason Monilaws, whose starting quarterback was injured in the first play of the game. Noah Falk did return to the lineup a few minutes later and take the snaps from that point on, but his team was already playing catch-up.

“What got us in a bad funk was when Noah went down. From that point on, things just kind of didn’t set up right for us,” Monilaws said, including an interception by Tri-State’s Jared Tangen on the goal line, or a drive to the 12 yard line in the second quarter that ended in Tri-State taking over on downs.

Not making excuses, Monilaws said the Tigers were a solid team who played better football Friday night. “You’ve got to bring your A game every night. If you don’t, you get bit in the butt. Tonight, we were out,” he said.