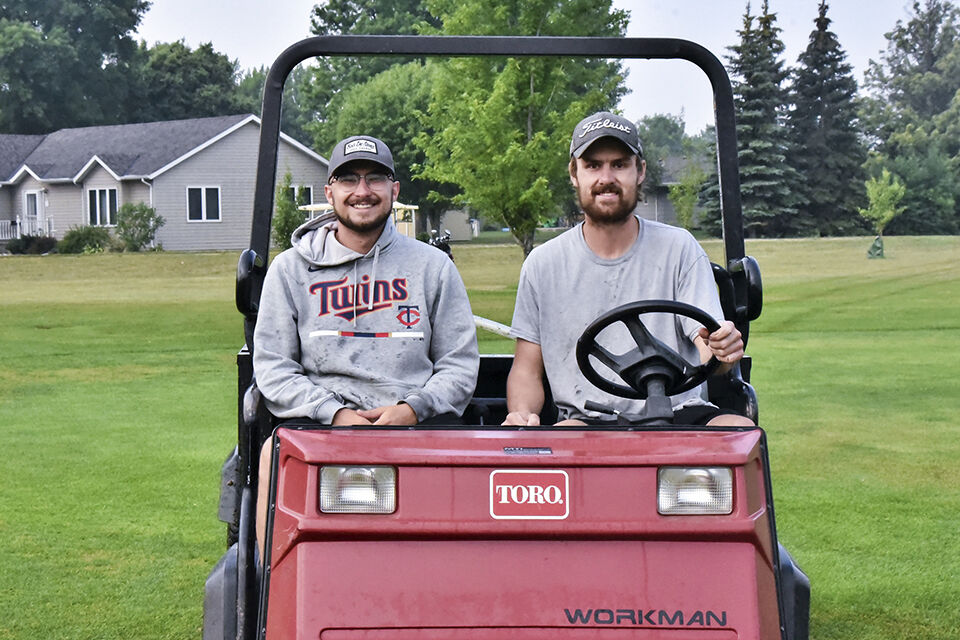 Austin Ralph (left) and Jake Richels hop on the Toro Workman after spraying the green on hole No. 11 with a wetting agent to combat recent surface drought. 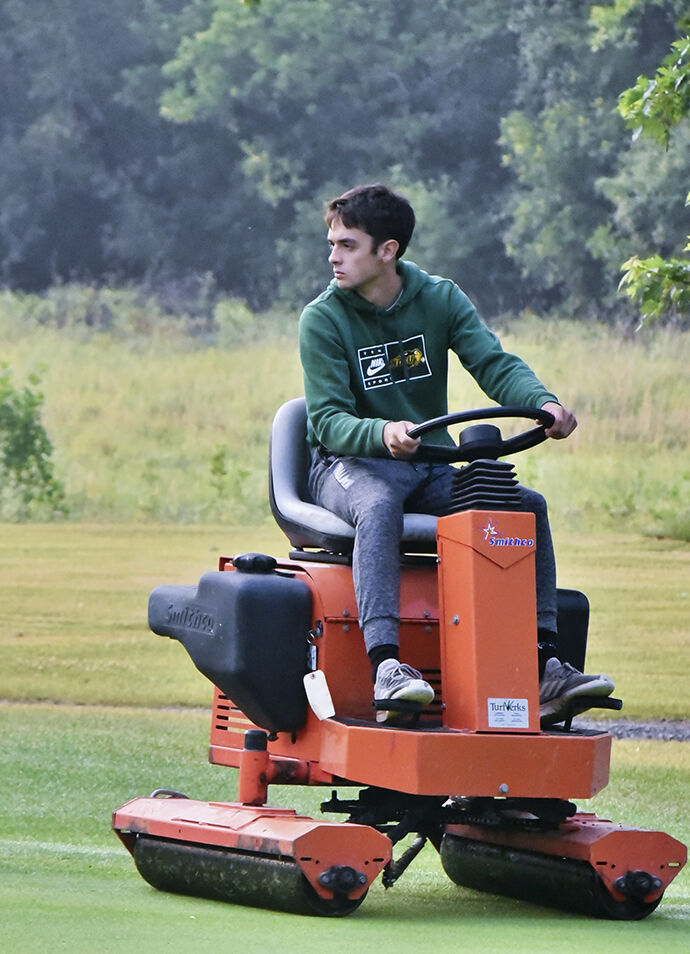 Austin Ralph (left) and Jake Richels hop on the Toro Workman after spraying the green on hole No. 11 with a wetting agent to combat recent surface drought.

Life on the links has been busy for newly-minted Bois De Sioux Golf Course Superintendent Jake Richels. The 2013 Wahpeton High School graduate and former all-East Region golfer is bringing the “Bois De” back to life with a determined team of locals by his side.

Jake and the Ralph brothers, Jordan and Austin, spend their early mornings crafting the course for peak playing conditions, moving from hole to hole as the sunrise chases them. They’ve become as much of a morning fixture as the birds and bees that inhabit the nature-filled back nine. If your tee time is early enough in the morning, you’ll find Jordan drifting around on the “Green Zamboni,” smoothing the surface so experts can putt for par and casuals can compete thanks to the beautifully true rolls.

“I really enjoy running our new essential piece, the greens roller. I feel like I’m getting things ready for the PGA Tour as I cruise sideways back-and-forth across the green,” course groundskeeper Jordan Ralph said.

The grounds crew takes great pride in course maintenance and the playing areas are beginning to look highly aesthetic due to the amount of hours Jake personally dedicates to the space.

“Last winter, when Jake told me his plan for taking over as superintendent, I knew the course would be in good hands,” Jordan said. “His intense studying and learning what to expect was incredibly impressive. After working a long day, Jake would put his nose in a book and his notebook. That work ethic has transferred over to the physical work of being a superintendent and also to everybody on the crew.”

Jake’s wife, Dominique Richels, is chairman of the Bois De Sioux Restaurant committee. She described him as a problem solver with a boyhood passion for the course which fuels his work ethic.

“He loves the Bois De Sioux. Growing up, he would spend his summer on the course with his buddies,” Dominique said. “He has no problem getting up well before the sun rises to get a jump on getting things done. He truly wants everyone to enjoy their experience out there.”

Jake is the quintessential humble learner. His willingness to seek advice from others has benefited his care for the course. Devoid of moisture, with dry conditions decimating its vibrant fairways and luscious roughs, breathing life into the Bois De Sioux has been a tough task.

“He understands that mother nature won’t always be on his side, especially when we’re in a drought. He spends a lot of time out there, so I spend a lot of time out there, too, so I can see him,” Dominique said with a laugh. “If he doesn’t know the answer, he doesn’t shy away from asking people that came before him and even asking superintendents from other courses for advice.”

The “Bois De,” as locals affectionately call it, is a true hometown hangout, a prized jewel of Breckenridge–Wahpeton with a rare community feel. One morning you might hit your ball into Wahpeton basketball coach Noel Eckroth’s yard and have it stolen by his dog, Remi. The next hole you may find yourself strolling past the Kvidera family corn hole tournament on your way to the sand trap. It’s only fitting that the keepers of the course are products of its own soil.

“It’s very inclusive. Some people think of a golf course as an uppity country club, but this is a community of people who love golf,” Dominique said. “I’ve noticed over the past two years the amount of new people we’ve gotten to the course. Memberships have been up over that time and Ladies League saw around 30 new members this season.”

It takes a special type of person to handle the workload a pristine golf course demands. Or maybe, it takes someone who cares about the golfing experience and those who play the two-state course more than himself.

“It’s all about the atmosphere. It doesn’t matter if you’re good or bad at golf. We’re just here for a good time,” Jake said. “The nice comments I get from the members is my favorite part. You know what they say, ‘Happy members, happy superintendent’.”

Jake leads a group of gleeful groundsmen in love with the labor. Unlike some sibling relationships, Wahpeton’s Ralph brothers rarely butt heads as coworkers. It’s a dynamic that’s allowed Jordan, the big brother, to find peace in his workflow.

“We communicate really well. We tag-team mowing fairways Monday, Wednesday and Friday,” Jordan said. “Austin has the ability to lighten the mood whether it’s the correct timing or not, and that has come in handy more than once.”

Jordan and Austin, sons of Wahpeton Head Golf Coach Jeff Ralph, are joined on the grounds crew by Mike Ferrell, husband of Breckenridge Head Girls Golf Coach Cheryl Ferrell. Mike is also the President of the Bois De Sioux board of directors. The local ties are lengthy, something Jake appreciates about his position.

“It’s great to have a lot of hometown co-workers who love to golf, because they take a lot of pride in doing a good job,” Jake said. “I owe a big thanks to Brian Rempfer and Peter Jensen for training me in and sharing their knowledge with me.”

Peter is a former superintendent of the course and Brian is a savvy staff veteran who knows the ins and outs of the grounds. Jordan echoed that sentiment, noting that the duo has helped him grow into his role on the crew with confidence.

“I’ve learned a lot from Brian and Peter, their knowledge and willingness to help has been priceless,” Jordan said.

On top of his decorated high school golf career, Jake was the 2019 Bois De Sioux Men’s League Champion. He spent his high school years working in the clubhouse golf shop.

“Jake worked for me on the driving range as a kid and then grew to work in the golf shop,” Head Golf Professional Dustin Harris said. “He knows golf and golf operations, which is a huge asset to have being the superintendent. Jake is also a great golfer, so he knows how the greens, fairways and tees should look and respond to golf shots.”

Harris, like many others, praised Richels’ ability to adapt under pressure, handling issues beyond his control with poise and leadership.

“It’s been a challenging start to the year with several equipment issues, irrigation breaks and very little rain, but Jake has kept a positive attitude,” Harris said. “He has been and will be a great asset to the Bois De Sioux for years to come.”

Richels, 27, previously worked in the maintenance field with Summerville Electric, also dabbling in the industry for a short period of time in Arvada, Colorado. Ultimately, he returned home to a 200-acre office right in his backyard.

“It’s always been a dream of mine,” Richels said. “If you don’t love what you do, then why do you do it?”

Brian Uhlich, Mike Broadland, Isaac Goetz, Tyler Tollefson and Gus Lasch are also part of the Bois De Sioux supergroup, working together in a complex effort of course grooming. With August nearing, they finally have the “Bois De” blooming.

“When the boss is working as hard as he does, it makes you want to try and match him. Good luck,” Jordan joked. “The Bois De Sioux is home and we love this course. We know what it can be, and we’re excited for the future.”